Human dominance of the Earth is threatened by … jellyfish 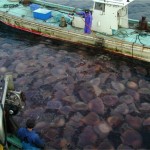 There is much more danger to jellyfish than mere stinging. There have been jellyfish problems in the Black, Baltic, East China and Yellow Seas, the Sea of Japan and off the coasts of France, Spain and Namibia.

In the 1980s, the species, mnemiopsis, was inadvertently introduced to the Black Sea, and within a few years if had eaten so much of the native marine life that it constituted 95 percent of the biomass of the region. Similar jellyfish problems were experienced at Whyalla in Australia early in 2013, this time caused by the species, bolinopsis, which is a slightly better predator and reproduces faster than mnemiopsis.

In November, Sweden’s Oskarhamm nuclear plant was forced to shut down a reactor when a wave of jellyfish became clogged in seawater pipes, a problem that has become common. Data centres cooled by seawater, such as that of Google in Finland, are also at risk.

Worldwide, there have been mass kills at salmon farms due to jellyfish. Jellyfish transform wine into water. While shrimp contain more energy than the plankton upon which they prey, jellyfish are low-energy. Where jellyfish are at their thickest, there can be more jellyfish than water. In 2000, a bloom of sea tomato jellyfish in Australia stretched for over 1,000 miles and was visible from space.

As the waters around Australia warm, box jellyfish, whose venom is among the deadliest in the world, are spreading further south along the Queensland coast, threatening tourism. There will be even greater jellyfish problems from the non-stinging variety in fisheries in cooler waters. Almost all the damage humans cause to the environment benefits jellyfish. Overfishing removes predators such as anchovies and discarded plastic bags choke sea turtles. There’s less dissolved oxygen in seas warming due to the greenhouse effect or waste contamination, leading predators to expend more energy just breathing. Waste clouds water, which is a problem for fish but not jellyfish, which are sensitive to touch and light, but have no brain to interpret images. 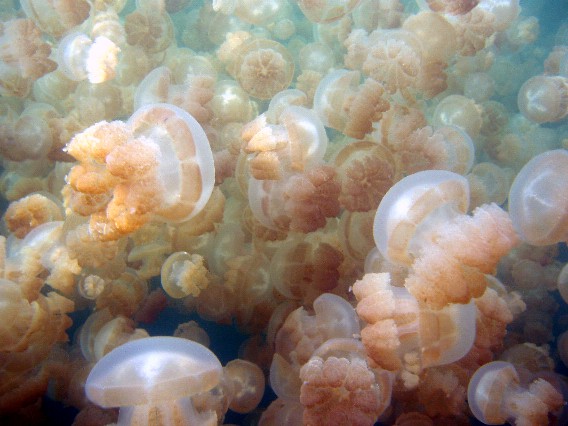 Lisa-Ann Gershwin, a research scientist who has discovered more than 180 new species of jellyfish and is the author of Stung! On Jellyfish Blooms and the Future of the Ocean, stated that ”warming water is a disaster for things that breathe and a dream come true for things that don’t breathe much” – which includes jellyfish. In warmer water, jellyfish breed more and grow faster. Lacking bones, jellyfish cope better with oceans that are growing more acidic: said Gershwin, ”They’re the last standing when everything else is disintegrating.” In the competition betwixt humans and jellyfish, Gershwin believes the jellyfish are triumphing.

Pleasingly, that might not last. Jellyfish Elimination Robotic Swarm robots have been developed by the Korea Advanced Institute of Science and Technology, passing field testing. These operate in formation and have propellers that mangle jellyfish, clearing around 1,984 pounds of jellyfish an hour and putting paid to jellyfish problems. Better still, the fluorescent protein, toxins and tissues of jellyfish are being evaluated for medical purposes. In China and Malaysia, jellyfish is a delicacy. The days of those gelatinous bastards are numbered.