How Were The Pyramids Built? 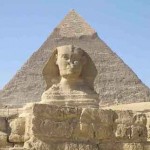 How were the pyramids built? With whips, of course. But it’s illuminating to take a closer look.

The Aztecs, Mayans and ancient Egyptians were three highly-distinctive civilisations with pyramids in common. The first two built pyramids that were tiered steps with a flat top, while the Egyptians went with what has become the classic design: four triangular sides.

The Egyptians probably selected this design because the sun god, Ra, regarded as the father of all Pharaohs, was thought to have arisen from a pyramidal mound of earth. A pyramid was also considered to represent the rays of the sun.

How were the pyramids built?

Pyramids were first built by the Egyptians soon after 2700BCE, and remained popular until around 1700BCE. The first, a step pyramid, was constructed at the behest of King Dioser in Egypt’s Third Dynasty. The best-known and largest are the Pyramids of Giza.

Long have people pondered the question of how were the pyramids built. Some believe extra-terrestrials to have been responsible while others hold that the Egyptians used long-lost technology.

The actual method of construction is much less exciting. It has been estimated that something from 20,000 to 30,000 labourers were required to built the Great Pyramid at Giza, which took them 23 years. Even that was much less than the nigh-on 200 years it took to build Paris’ Notre Dame Cathedral.

Pharaohs would initiate construction of their pyramid upon ascending to the throne. Usually, pyramids were situated on the west bank of the Nile because the Pharaoh’s soul was believed to join the sun disc when it set. The two most critical factors in the placement of a pyramid were its orientation to the western horizon where the sun went down and closeness to Memphis, the principal city of ancient Egypt.

The insides of pyramids were usually made from local limestone while the exteriors were higher quality limestone that produced a white sheen visible from miles distant. The capstone was most often comprised of basalt, granite or some other very hard stone and might be plated with silver, gold or electrum – an alloy made of the two.

When asking how were the pyramids built, the answer isn’t slaves. Those peasants who toiled on pyramids received tax breaks. Their tombs were certainly not those of slaves – for one thing, they were close to the pyramids, a privilege that wouldn’t have been afforded to slaves.

Stones were dragged by oxen or men over a slipway coated with oil as depicted in hieroglyphics. When the stones reached the construction site, ramps were used to put them in place. The ramps were made from mud brick coated with plaster chips to harden its surface. Donald Redford, professor of Classics and Ancient Mediterranean Studies at Penn State University, said he knew how were the pyramids built without recourse to extra-terrestrial or lost technology because “I was on the ropes, too.”