How Does The Dyson Fan Work? 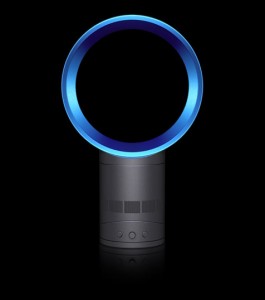 I have been a huge fan of Dyson since first buying a Dyson vacuum cleaner 4 years.

I was initially skeptical about buying a ‘premium price tag‘ vacuum cleaner. I mean let’s be honest – it’s a vacuum cleaner. An appliance that at best should be relegated to the back corner of the laundry room or stored under the stairs. No-one should get excited about a vacuum cleaner, let alone the activity of vacuum cleaning!

So when I bought my Dyson vacuum cleaner

I was surprised to feel a sudden urge to use it, again and again. Seriously, it is an incredible piece of technology that delivers superior results seamlessly. I feel like ‘Super Cleanman’ when I use it and cannot sing its praises enough.

That’s the incredible thing about James Dyson. He has the ability to transform the seemly prosaic and banal appliances into something that is beautiful, exciting, innovative, fun, exceptionally functional and interesting.

. If you haven’t used it yet; get your ass down to the nearest public toilet and give it a go. Properly genius!

. Again, I cannot sing the praises enough for this beautiful product. It really illustrates how Dyson manages to integrate technology with art, and it is worth every penny. James Dyson, like Steve Jobs, has the undeniable ability to design products that are exquisitely executed and exceed the desires of consumers.

My Dyson fan sits prominently in my apartment and constantly draws attention to itself from visitors to my home. The conversation usually goes something like this:

“Wow, what is that?”
Followed by;
“Seriously, how does it work?”
And concludes with;
“Amazing, I’m getting one”

But I’m getting tired of explaining how the Dyson fan works so I thought I would write an article to help those amazed technophobes. Here goes! 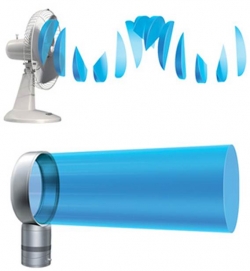 How does the Dyson fan work?

The Dyson fan solves the old problem associated with blade fans – that of pulsating buffeted and chopped air – that delivers an inconsistent and often irritating blast of airflow. It does this by using an air multiplier effect.

Step 1: One unit of air is sucked into the base of the fan. From there the air passes through a mixed-flow impeller which increases the pressure and flow

Step 2: It then passes through a small gap in the air cylinder at an accelerating speed which forces the air down and over the outer area of the fan which is shaped like an aircraft wing. The effect of the air passing over the outer cylinder creates a negative pressure which multiplies the airflow even more

Step 3: The negative pressure of the air being forced down and over the outer fan surface draws latent air (from behind the fan) into the accelerating air stream creating more of a multiplying effect

Step 4: In addition, the effect of having a cylinder of air (i.e. a body of air moving out from the fan) creates what is termed ‘viscous sheering’ – essentially more latent air joining the accelerating air stream to multiply the airflow

The overall effect is that one unit of air is multiplied 15-16 times by the time that it exits the fan cylinder. And instead of that airflow being disrupted by blades it moves as one single body of the air; thus creating a consistent and pleasant flow of air that is not pulsating.

Pros and Cons of Dyson Fans

Pros of the Dyson Fan

There are four main pros for the Dyson fan:
1. It creates a single flow of air that is consistent and not pulsating – which is a serious improvement on the old air blade fans which give you a blast of buffeted air
2. It is obviously much safer than ordinary fans as it has no moving parts
3. It is exceptionally easy to clean – most blade fans get clogged up with dust
4. It’s beautifully designed can act as a stunning feature for an office or home

Cons of the Dyson fan

To be honest I don’t really have any Cons for the Dyson fan. Some people feel it is on the pricey side – but as I said earlier, it is worth every penny in terms of its functional execution and seamless style. I have also read reviews where people say that it is too loud.

For me, I have not found this to be a problem. It is definitely no louder than your average blade fan. So all in all, I believe the benefits far outweigh any cons

Are you too hot in the office? Why not get a Dyson fan for the workplace. Here is a funky design that will impress staff and other visitors to your workplace. Dyson Hot and Cool Bladeless Fan Heater

A brilliant autobiography by one of the greatest inventors of the 20th century. A true rags to riches story about self-belief and optimism in the face of adversity. Against the Odds: An Autobiography