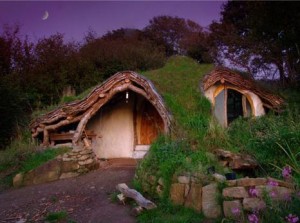 December 2012 saw the premiere of one of the most eagerly anticipated films of last year – J.R.R. Tolkien’s ‘The Hobbit’. As a child, I was inspired by the simple lifestyle of Bilbo Baggins, the hero of the story. His home, known affectionately as ‘Bag End’, was a sub-terraneal woodland dwelling, and even to this day this simple Hobbit home has captured the imagination of millions as a result of its enchanting description in the original book.

The book was written in England nearly 80 years ago, and Tolkien surely could not have imagined the impact that this piece of children’s literature would have on the 21st century western world. For a start, the book is the prequel to the immensely popular Lord of the Rings series, the films of which have grossed circa $3 billion worldwide. The Hobbit films are sure to follow in the wake of this success. However, a more subtle influence that Tolkien’s stories have had can be found dotted around the Welsh countryside – emerging in places previously untouchable by the hands of builders and developers. Yes, for the first time in hundreds of years, legislation is making way for people to erect (or rather excavate?) their own Hobbit Homes and literally live off the land in a completely sustainable fashion.

Whether the inspiration for these dwellings can be fully attributed to the genius author is debatable – however their likeness to the author’s depiction is undeniable.

The 1947 Town and Country Planning Act was put in place to prevent the English and Welsh countryside falling prey to the hands of developers. So what change in Welsh policy has made way for ‘Low Impact Development’ (LID) in previous green belt areas? The answer can be found in the ‘One Planet Development’ Technical Advice Note (TAN) 6 – released in 2000 – which provides guidance for ‘strong rural economies’ and allowance for ‘permaculture’. Permaculture is defined as ‘The development of agricultural ecosystems intended to be sustainable and self-sufficient.’ – which in laymans terms, means that people can live off the land.

One such group that is making the most of the allowance for LID’s within planning policy is the Lammas community in Pembrokeshire, Wales. What they have achieved is an ecovillage based around the principles of sustainable living in all aspects of life. For example, a car sharing and minibus service provides transport to the nearest town, there are no mains services to the site, and all organic waste is ‘composted’ on site.

The dwellings on the site incorporate various sustainable construction techniques, mainly based on roundwood timber frames. Walls are constructed using straw and hay bale infill with lime plastering. As far as possible, materials are sourced locally, with the roundwood being felled from the woodland on the edge of the site.

A communal building called ‘The Hub’ is built at the centre of the site, and will provide teaching and training to those interested in this way of life. The building has been funded by the Department of Energy and Climate Change, thus there is positive government involvement on the site. Planning permission for each dwelling on the site has been challenging at the best of times, however the Lammas community have pioneered a way for truly sustainable living to become a reality.

Opinion remains divided on the impact of these sites on the protected countryside, and one can only speculate whether England and the rest of the UK will follow suit. Perhaps if Tolkein were still around today, his works might have some persuasion over the powers that be, but for now, his ideal fantasy realm remains restricted to a small corner of the modern world.