Hedgehog Preservation – How You Can Help Out

When people think about wildlife conservation, they often picture exotic landscapes – lions stalking zebras in the African savannah, the luscious rainforest in the Amazon, or the coral reef in the Pacific.

Truth is, Europe is very much alive with conservation initiatives aimed at protecting our own wee beasties.

And while some of these beasties may be a tad less impressive than their tropical counterparts, the coolest thing about them is that you can take an active role in their conservation.

How? Lots of ways. We’re going to focus on hedgehogs today – but tips on how to help out other critters will follow.

The hedgehog (Erinaceus europaeus) is found all over Europe, and it’s classified as Least Concern by the International Union for the Conservation of Nature (IUCN). This means that there’s a lot of them, and no real risk of extinction currently exists.

That being said, there’s been a constant drop in the population numbers in the UK, for a number of reasons that include predation and changes in land use.

This is a bad thing.

The good thing, though, is that hedgehogs are quite happy to live in habitats modified by humans – parks, farms, orchards, and yes, your own garden. This is where you come in. If you have a garden, or even just a backyard, really, you can make it a bit more welcoming.

Hedgehog preservation ideas that you can implement in your own garden

The first thing you can do is to make sure hedgehogs can come and go.

Hedgehogs move a lot every night, looking for food – that means, sadly, that if you have one visiting you, it’ll probably be gone soon. So make sure your garden is connected to the outside world – a hole in the fence, a missing brick, a little tunnel will be enough. Or even better, have hedges instead of walls and fences! Hedgehogs are crazy about them. This, oddly enough, is the reason why they’re called hedgehogs.

In the wild, hedgehogs eat a lot of bugs. And other disgusting things like that – worms, slugs, and so on. But they love dog or cat food, so if you see your garden is trafficked, you can leave a bit in a shallow bowl. Nuts, seeds and fruit are good alternatives as well.

Milk… not a good choice; it will do more harm than good. Put the food some place other animals cannot reach, or you will probably just be serving dinner to cats, dogs or foxes. The best option would be to build a feeding station – a simple plastic box, with a 15×18’’ entrance that will prevent other animals from stealing the food you left.

Now, how about the sleeping arrangements.

Hedgehogs hibernate during winter – October to April, roughly – and they need a safe place to crawl under to do that. The best thing you can do is to keep your garden a bit wild, so that there’s enough places for them.

Other good ideas include wood piles, leaf piles and compost heaps. And to survive winter they need extra food to fatten up, so if you have hedgehogs in your garden make sure there’s plenty of stuff for them to nibble on from September to March.

Oh, and for the love of God, check your fire pits and wood piles before you light fires outdoors. Hedgehogs – among other animals – might be hiding underneath it. Burning animals alive is something that’s quite frowned upon in the conservation community.

Here are some cute hedgehog pictures 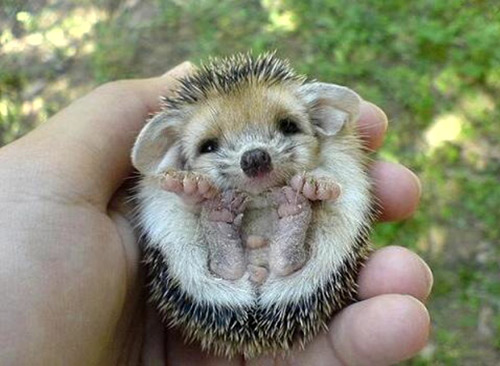 Freeze, put your hands up! 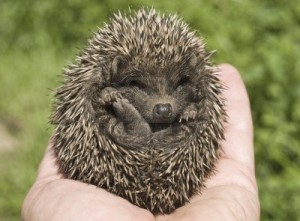 Have a look at the IUCN page, Hedgehog Street, and the British Hedgehog Preservation Society.

Feeling in the mood for some more science? Read this thesis on the decline of the hedgehog in the UK.