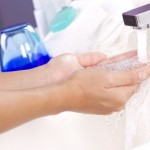 It was realised that hand washing kills bacteria and so prevents the spread of disease back in 1847, when a Viennese doctor found that doctors washing their hands drastically reduced the incidence of puerperal sepsis, otherwise known as childbed fever, a disease that struck women during childbirth. Washing your hands is one of the most effective ways of staying healthy.

People in the United States generally wash their hands seven times daily – 800 billion times a year – which consumes a great deal of energy and generates six million tons of CO2 equivalent, or as much as Barbados.

Heat extinguishes bacteria, but to kill most of them would require water that scalded the skin. Water for hand washing is usually of a temperature of between 104°F and 131°F. Hand washing kills bacteria just as much at 40°F as at higher temperatures, so long as hands are properly scrubbed, rinsed and dried. Hot water can inflame the skin and damage its protective outer layer, making it less resistant to bacteria. If the skin cracks, people might wash their hands less. Cold water is certainly less comfortable, but water that’s only warm will do nicely. True, you sterilise water by boiling it, but it goes unproven that hot water is more effective than warm, as 70 percent of respondents believed. Mostly, it’s the soap rather than the temperature that despatches germs.

A closer look at the subject

Research by Vanderbilt University in the United States published in the July 2013 International Journal of Consumer Studies investigated hand washing. Questions were asked of 510 adults from around the country: how often they wash their hands, how long this lasts, how hot is the water and so forth. Hand washing kills bacteria, but it would still do so if every US citizen used cooler water. The energy required to heat water currently leads to carbon emissions equal to those of 299,700 homes.

You could save money

There would be a financial benefit, as the American Council for an Energy-Efficient Economy revealed that water heating is the largest consumer of energy in a home after heating and cooling – 15 percent in the United States and European Union. Homeowners frequently turn up their hot water heaters much higher than is required by most household tasks, with every reduction in water temperature of 10°F lessening water heating costs by anything from three to five percent.

Hand washing kills bacteria, but Todd Sack, a doctor with the Florida Medical Association’s Council for Healthy Floridians, remarked, “You don’t need hot water, you need soap, water, and friction.” When the Escambia County Health Department of Pensacola, Florida, turned off the hot water heaters in its five clinics in 2011, $2,500 a year was saved.

What else do you do with hot water?

A study by Norwegian researchers in 2011 discovered that if clothes are washed at 86°F (30°C), clothing is cleaned as effectively as the more popular level of 104°F (40°C), 30 percent less energy is used and there is less impact on the garments.

The cost of heating water can be further reduced by means of recirculating pumps, on-demand heaters and insulation of pipes.