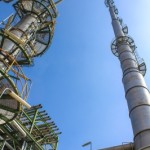 As global conventional oil and gas reserves dwindles and becomes more difficult to access, the world energy production trend is shifting to the exploration of unconventional reserves (shale gas and tar sand). Countries such as the US, Canada and even China have increased their investments in these reserves to help guarantee security of energy supplies for meeting rising energy demand.

However, the associated and potential environmental impacts of extracting oil and gas from unconventional reserves have raised serious global concerns.

Specifically, the controversial hydraulic fracturing (fracking) method employed in exploring oil and gas from these reserves has been reported to contribute to land and groundwater contamination. In particular, the chemicals used during the hydraulic process have contaminated groundwater reserves in poorly managed wells.

High levels of methane gas released during the exploration of shale gas infiltrates fresh water wells around the reserve and production site. This expelled methane gas can lead to the explosion of water wells, as experienced in Dimock, Pennsylvania.

The exploration of unconventional reserves has also been reported to cause minor earthquakes in places such as Ohio.

Coupled with these, the process of exploring unconventional reserves and usage of oil and gas produced from these sources releases significant amount of greenhouse gases to the atmosphere, thus contributing to climate change.

Despite the fact that the aforementioned impacts of exploring unconventional reserves are significant and have been widely discussed, little has been told about the other footprints of exploring these energy sources, in particular, guar seed cultivation!

Seeds of guar beans (Cyamopsis tetragonoloba), a common vegetable in India is widely used in the hydraulic fracturing process of exploring unconventional reserves. The powdery gum extract of guar has a unique chemical property that makes it effective for increasing fluid jet forces during the cracking of rocks. Guar also produces a gel that stops newly formed cracks from closing which eases the process of exploring unconventional reserves. These unparalleled properties of guar plant and seeds, and its benefits to the oil and gas sector have increased its demand in countries such as the US and China.

80% of the world’s guar seed and gum is cultivated in India, out of which 70% of this production from India is done in Rajasthan. In 2011/12 alone, over 7 million tonnes (MT) of guar gum was exported from India to countries such as the US, China, Germany, Russia and Australia – most of this production is being used for unconventional oil and gas exploration. These figures are expected to increase in the coming years as the industry expands.

Guar seeds are not only used in the oil and gas industry, there is also a great demand for guar in other industries such as the agricultural and pharmaceutical sectors. Guar is used as a food additive and a thickening agent; it has also gained wide application in the agricultural sector for feeding animals because of its high protein contents. Nonetheless, 90% of the produced seeds are used up in the oil and gas industry.

As the shale gas and tar sand industry expands, the cultivation of guar will equally increase to meet the demand of the industry. Increased demand for this crop in the oil and gas sector will threaten its availability as a food crop for feeding animals in India and also for meeting the needs of other industries.

Coupled with these impacts, it is forecast that deforesting is likely to increase in order to make more land areas available for cultivating guar because of its economic value. This will decrease the amount of trees available for sequestrating CO2 emission, thus increasing the carbon footprint of exploring unconventional reserves. In the long-term, the continuous cultivation of this crop will lead to soil degradation in the few areas of the world such as India and Pakistan where this crop is grown.

Moreover, there is a strong possibility that the continuous cultivation and the expansion of guar plantations in India will further increase ground level ozone (O3) pollution in the country. This is because India is a fast growing nation with high levels of nitrogen oxides emitted from anthropogenic activities. These oxides of nitrogen in the presence of sufficient volatile organic compounds (VOCs) such as isoprene, which is released from guar plants, forms more ground level O3. Ground level ozone reduces crop productivity and it is detrimental to human and animal health.

Despite the fact that the exploration of unconventional reserves will help guarantee energy security, it is clear that the  full cost of externalities such as its social and environmental impacts need to be properly understood and mitigated wherever possible.