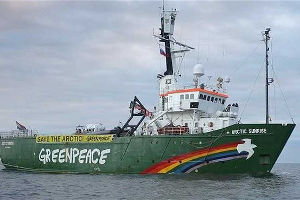 Greenpeace lost USD5.1/GBP3/EUR3.8m through betting on currency by an employee who meant well, honest. The environmental group, based in Amsterdam, revealed on Monday 7 July that the “very senior” employee had exceeded his authority when he bet that the euro wouldn’t strengthen against other currencies in 2013, but it did, despite the currency’s woes. Jeremy Clarkson, fresh from making an ill-received racial comment on air, bellyached that “greed” was the cause, although he is himself rolling in it.

The unnamed employee was terminated, however there was no evidence of fraud so he faces no further legal action. The judgement of spokesman, Mike Townsley, was that Greenpeace lost money thanks to a worker who had “the best of intentions but not the best of judgement.” He added that his employer bore some responsibility for the happening, and as a result, its authorisation policy had been “completely re-written” and an independent audit would be conducted.

Townsley disclosed that Greenpeace was extremely concerned that the episode might offend supporters, for which he apologised. “Might” was an understatement. The organisation lost 700 members in Germany as a result. While other environmental groups have been weakened by accepting contributions from companies or governments, Greenpeace doesn’t do so – it’s entirely funded by individuals, with more than 90 percent being less than USD100/GBP58/EUR73.

The employee was a financial expert whose remit included currency trading to guard Greenpeace from market fluctuations, but he was unqualified to place trades on this scale and ignored company rules that dictated that he ought to have checked with a superior. Even before this latest occurrence, internal documents told of “internal team and management problems” and “errors and substandards in the quality of financial systems.” Greenpeace lost out in the currency market which is worth USD4.7/GBP2.74/EUR3.45 trillion a day, the largest in the financial system and also one of the least-regulated.

This was not the only misfortune to befall Greenpeace. In June, the newspapers, the Grauniad and Daily Hate, reported that Pascal Husting, a senior executive, was commuting several times a month by air from his home in Luxembourg to Greenpeace’s head office in Amsterdam rather than endure an 11-hour train journey, while the organisation condemns virtually all air travel. Husting admitted, “I ignored the voice of my own conscience. It was the wrong call.”

Furthermore, the Indian spy service, the Indian Intelligence Bureau (IB), again in June claimed that foreign NGOs, of which it named Greenpeace as one, had caused a fall in GDP of between two and three percent, making it “a potential threat to national economic security” that was “growing exponentially.” This was because it created “obstacles in India’s energy plans” by pressuring the country to use naught but renewable energy, which included campaigning against mining, and opposed genetically-modified food. Greenpeace took exception to a steel plant and a bauxite project. The IB bewailed that dozens of development projects had stalled.

Greenpeace is as much of a transnational corporation (best not call them multinationals) as the companies against which it campaigns. It has 2,000 employees, 28 offices, over three million members, and an annual budget of USD514/GBP300/EUR378m. Its navy is larger than those of three quarters of the governments of the world. The body is attempting to decentralise, and some staff are upset that they have to move to the Third World.

Greenpeace lost this time, but profited from currency trading from 2009 to 2011.

5 Places Where You Can Sell Your Used Industrial Equipment