Green Chauffeuring Is Taking Off 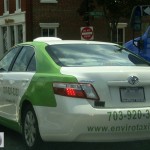 The popularity of green cars is growing. In 2011, the motor industry group, SMMT, released figures showing that registration of alternatively-fuelled vehicles had risen by over 48 percent since the year before, compared to 1.5 percent for all vehicles. While chauffeured cars conjure an image of massive, gas guzzling limos, an increasing number of chauffeuring companies mention their greenery in their advertising to capture the environmentally-aware market segment.

One of the first chauffeuring services to take this route was Olympus Worldwide Chauffeured Services, which is headquartered in Atlanta but covers cities across the globe. It boasts that its cars are black but its business is green: its fleet is comprised of flex fuel hybrid vehicles.

Olympus is serious in its service to the environment. Its offices are open 24 hours a day but 100 percent carbon free. All records have been converted to digital format, reducing paper usage by 65 percent, with materials that must be printed, such as brochures, using recycled paper. All light bulbs are Energy Star-certified. Olympus has a policy of buying green, patronising only companies with established sustainability programmes.

The strategy appears to be successful. Olympus grew by 261 percent in the last three years and posted revenue of $2.5 million in 2011. Inc Magazine named it one of the Top 100 Logistics and Transportation Companies of 2012.

Enough other chauffeuring companies that operate in the United Kingdom have gone green to discern a bandwagon. Examples are Avis Chauffeur, Ecochauffeur, Pink Express, Greentomatocars, UK Chauffeur Network and Tristar Worldwide Chauffeur Services. The last two have been rewarded. UK Chauffeur Network was the first European member of Green Ride Global, a global network of chauffeuring companies committed to lessening the environmental footprint of their craft. Tristar’s reduction of CO2 emissions by 7.5 percent since 2009 earned it a Queen’s Award for Enterprise in International Trade and caused it to be shortlisted for the Energy Saving Trust Fleet Hero Awards.

Chauffeuring may not be out of range financially. The USD384,000/GBP250,000/EUR289,000 Rolls Royce Phantom is quite possibly the most luxurious car in the world and beloved of celebrities such as David Beckham, Alan Sugar and Simon Cowell. The Environmental Transport Association claims that it costs less to be chauffeured in a Phantom than to travel by tube. The £200 per hour charge for such a car results in a cost of USD37/GBP24/EUR28 per mile in central London, while a tube ticket can cost as much as £24 per mile.