Globalisation and low wages – are both reaching their limits? 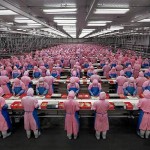 In a talk given at the University of Southampton, Green Party leader Natalie Bennett heralded the return of Pot Noodle manufacture to Britain as a symptom of the slow-down of globalised production.

Symington’s, the parent company of the Pot Noodle brand, has cited the rising cost of production in China as one of the main reasons for bringing home the manufacture of the student staple.

However, it is not just China that is seeing an increase in production costs. According to the Stanford Graduate School of Business, wages are rising across the developing world – a study of 18 emerging economies showed that, on average, workers’ wages have increased by 25% from their pre-liberalisation pay (higher than even China’s rate of inflation).

Coupled with the constant rise in fossil fuel prices, it is possible that globalised production may soon fail to make financial sense.

Bennett claimed that the global race to the bottom is necessarily nearing its end – the spread of capitalism sees workers in developing nations adopting a ‘why not us too?’ mind-set, resulting in a rise in workers’ wages and rights, and therefore greater costs for companies who have moved to the developing world to take advantage of low levels of both.

As Marx claimed, the capitalist system may indeed be sowing the seeds of its own destruction.

Global supply chains face risks from many factors, including their elongation (as a result of the increasing multinationalisation of corporations), increased levels of economic uncertainty post-2008, rapid rates of technology change (which increases product obsolescence) and service level efficiencies (consumers are expecting products to be delivered to them faster), supply side capacity constraints (as production rates reach their maximum), and external environmental events and natural disasters.

In short, the further away a product is manufactured from its final destination, the greater the risks in getting it there, and the higher the chances of greater costs being incurred.

Bennett claims that this delicacy, combined with rising production costs, may see the global production chain collapse under its own weight.

Symington’s have experienced first-hand that globalisation of production is not necessarily an antidote to the issues presented by domestic production, and reversed their policy of outsourcing for the Pot Noodle. The Green Party leader hopes that this isn’t a one-off, and expects to see a growth in local production and consumption to challenge the global capitalist paradigm.

For this is the solution, Bennett claims – not a dismantling of the entire capitalist system, but a return to localism, and the reintroduction of a model of domestic production for domestic consumption.

Whilst presenting obvious environmental benefits, this would also work to reduce the levels of exploitation between developed and developing nations. Bennett stressed that she is not anti-capitalist, but that the Party did want to see a move to “rebuild, reshape and change” the capitalist economy so that it works for everyone, and does not rely on the exploitation of low wages in developing nations and rapidly diminishing supplies of fossil fuels.