Is The World On Course To Exceed The Global Warming Target Of 1.5°C Agreed In Paris? 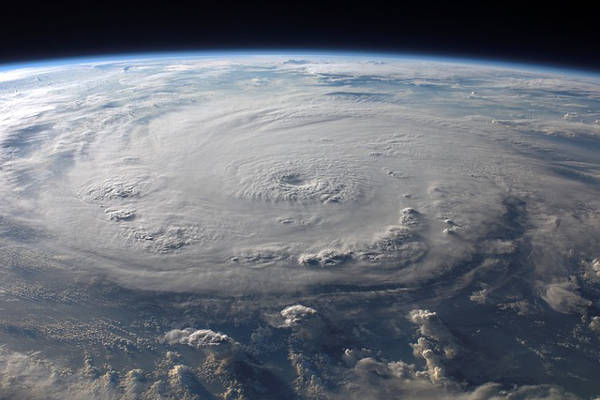 The World Meteorological Organisation (WMO) latest report on the State of the Global Climate confirmed 2017 was one of the three warmest years on record.

It was also the warmest year on record that did not feature the effects of El Niño which were present in 2015 and 2016.

According to the report the global mean temperature for 2017 was approximately 1.1°C ± 0.1 °C above pre-industrial levels, which is close to the aspirational target of 1.5°C that 195 nations sought to mitigate through the Paris Agreement.

The WMO noted that the long term indicators of climate change such as increasing carbon dioxide concentrations in the atmosphere, rising sea levels and ocean acidification continue unabated from previous years.

The WMO also highlighted the extreme weather events that occurred across the globe in 2017.

In the Southwest Pacific, Cyclone Debbie hit the east coast of Australia with winds of 43 m s−1(80 kt) resulting in widespread wind and flood damage.

Insured losses for Debbie were approximately 1.3 billion U.S. dollars, the second highest on record for an Australian tropical cyclone.

The WMO’s findings on the global temperature increase are supported by analysis carried out by two U.S. government agencies, the National Aeronautics and Space Administration (NASA) and the National Oceanic and Atmospheric Administration (NOAA) who both reported similar global warming trends in 2017.

Scientists at NASA’s Goddard Institute for Space Studies (GISS) in New York found that globally averaged temperatures in 2017 were 0.90°C warmer than the 1951 to 1980 mean, which is second only to global temperatures recorded in 2016. 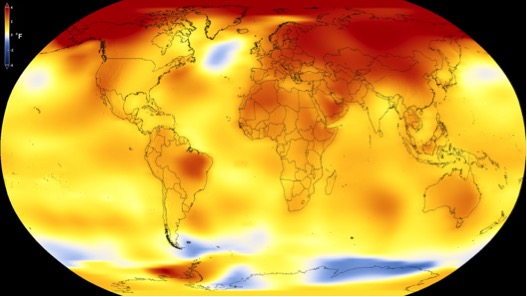 The NASA map above shows Earth’s average global temperature from 2013 to 2017, as compared to a baseline average from 1951 to 1980, according to analysis done by GISS scientists. The yellows, oranges, and reds on the map show regions warmer than the baseline.

Scientists at GISS concluded that the planet’s average surface temperature had risen a little more than 1°C since the last century, a change driven primarily by increased carbon dioxide and other anthropogenic emissions being released into the atmosphere. 2017 was the third consecutive year in which global temperatures were more than 1°C above late 19th century levels.

“Despite colder than average temperatures in any one part of the world, temperatures over the planet as a whole continue the rapid warming trend we’ve seen over the last 40 years,” said GISS Director Gavin Schmidt.

In a separate piece of analysis scientists at NOAA concluded that 2017 was the third-warmest year on record.

The difference in rankings between NASA and NOAA is simply down to the methods used by the two government agencies to analyse global temperatures. Both use the same raw temperature data but apply different baseline periods and methods to analyse the data.

More importantly what the WMO, NASA and NOAA results reveal is an increased global warming trend particularly over the last three years. Is this trend set to continue in 2018?

Current data suggests that another record year is most definitely on the cards. Extreme weather events in the Atlantic Ocean (Hurricane Florence) and record breaking tropical cyclones in the Pacific Ocean (Mangkhut) also point to sustained global warming activity.

The report released on 8th October 2018 by the United Nations Intergovernmental Panel on Climate Change (IPCC) set out in stark terms what is likely to happen if global warming cannot be kept within 1.5°C. According to the IPCC we are currently on track to reach 1.5°C between 2030 and 2052, if temperatures continue to increase at the current rate.

“The overall big question in this report is how we can still get to that 1.5°C goal? What does it take?” said Kaisa Kosonen Senior Policy Advisor at Greenpeace.

Climate change campaigners have stressed over recent months how important it is for signatories to the Paris Agreement to stand by their commitments,which is in part a veiled plea to President Trump to reconsider his decision to withdraw the United States from the agreement.

The UN Secretary General, Antonio Guterres recently warned that if the world does not change course by 2020, we run the risk of runaway climate change. “The mountain in front of us is very high. But it is not insurmountable. We know how to scale it.” the Secretary General said in his speech at UN headquarters in New York.

As the threat of climate change becomes an ever-increasing global reality, politicians and policymakers from around the world can no longer just kick this proverbial “tin can” down the road.