Fact: The world is fast changing

Now, I’m not talking about technological change – which has obviously been happening at an ever increasing rate since the 1950s and has had, and will continue to have, an enormous impact on the world.

No, what I am taking about is a more systemic global change associated with the earth’s natural systems and the way that we, humans, interact with them.

In this article I discuss three megatrends which will shape and define the trajectory of the world, humans and all its living things for centuries to come.

In shaping the world I believe that the business of the future will have to adapt, innovate and transform to remain competitive and successful.

It is too easy to go all ‘doomsday’ when looking at these megatrends, so instead, I have tried to write this article from a positive perspective – highlighting how I believe the business of the future can respond with solutions that drive growth and shared value (i.e. the idea that social issues can be incorporated into core business strategies to benefit both society and a firm’s financial success). 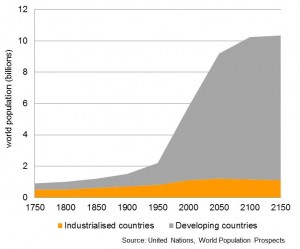 The human population has grown at a staggering rate since the 1950s and is predicted to breach the 7 billion mark by the end of 2011 reaching 10 billion by 2100.

The earth can only produce a limited amount of natural resources and assimilate waste to a certain point before something has to give.

Much has been written on population growth from early social scientists such as Malthus to more contemporary thinkers such as Ehrlich’s Limits to Growth: The 30-Year Update (if you are interested in this area I recommend reading both books).

Many criticise the population growth argument as it is seen as too controversial to intervene in the normal process of procreation.

But the truth is that there are just too many people on the planet.

Since industrialisation we have been moving from a stable to a very unstable situation. Eventually the earth will kick-back and try reach a stable equilibrium again.

The impact of the earth kicking back is already being felt. You only need to read the news to hear about massive food and energy security issues, degraded and toxic environments, mass-scale biodiversity loss, deforestation, desertification, extreme poverty, and epidemic outbreaks.

The frequency and intensity of these impacts will merely heighten as the world’s population continues to grow.

The challenge posed by population growth is non-trivial – the business of the future will be one that provides products and services that makes living in a highly populated world easier and safer to bare.

Get your thinking caps on. 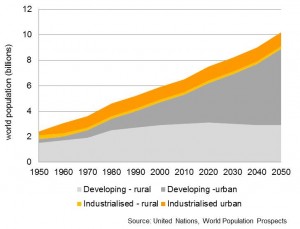 As the population has grown so has the trend towards urbanisation.

The impact of  rapid urbanisation is putting extreme pressure on the economic, political and socio-cultural stability of the cities which we rely on to fuel the global economy.

The future business will be one that can adapt to the challenges posed by urbanisation and potentially deliver solutions which address key issues such as shortages in housing and  infrastructure, air quality issues, widespread health and disease issues, and gridlock traffic 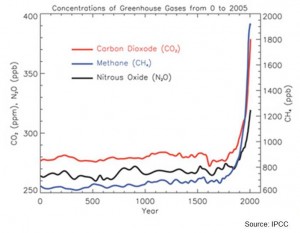 Over the past 30 years climate change has become a hotly debated topic.

The debate has centered around three issues: 1. Is climate change occurring? 2. If so, are the changes being caused by human activity? 3. What are the implications of a changing climate?

Nowadays, there is widespread scientific consensus around issue 1 and 2.

Scientists are confident that global mean temperature is about 0.5 °C higher than it was a century ago; that atmospheric levels of CO2 have risen over the past two centuries due to human activity; and that CO2 is a greenhouse gas whose increase is likely to warm the earth.

I started this article saying that I would not talk about technology and so far I haven’t, but what article on transformational change will be complete without technology?

We are so lucky to be living at such a special time in the world’s history. For the first time we can connect with people all over the globe at a touch of the button, many of us can get access to anything we desire, and are free to travel at our slightest whim.

Yes, we still face huge challenges and many people still live under the bread-line or worse, but in many ways there has be incredible progress over the last few hundred years.

I remain confident that, although these megatrends seem insurmountable, we will respond for the better and find solutions that address our plight.