Fracking Threatens To Fracture The Coalition 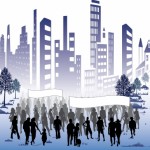 Following increasing public disquiet about fracking, including the recent protests and direct action around the Sussex village of Balcombe, which saw the arrest of Green Party MP and former leader Caroline Lucas, cracks have started to appear in the coalition Government over energy policy.

Chancellor George Osborne has stated that he wants to “put Britain at the forefront of exploiting shale gas” and Prime Minister David Cameron, in an article for Lord Lawson’s climate-sceptic think-tank the Global Warming Policy Foundation, wrote: “we cannot afford to miss out on fracking”

But this enthusiasm for shale gas demonstrated by the holders of the two top jobs is not shared by all members of the government.

Meanwhile, a policy paper produced by the Liberal Democrats in advance of their forthcoming conference puts clear daylight between the party and their coalition partners on a range of energy-related issues, including shale, where the paper’s authors flatly contradict the Chancellor’s views, stating: “There is no realistic prospect of a ‘shale gas revolution’ in the UK.”

In a more measured assessment of the potential role of shale gas in the energy mix that is in marked contrast to the wild enthusiasm shown by senior Conservatives, the paper goes on to conclude: “There is value in promoting domestic production rather than imports, so Liberal Democrats would permit measured shale gas extraction, ensuring that regulations protecting water and land pollution and local environmental quality are strictly enforced at a national level. Planning permission decisions should remain with local authorities however, and local communities should be fully consulted over local extraction, and fully compensated for all damage to the local landscape.”

The debate about fracking, as with that over wind farms, has tended to focus on the local environmental impacts, real or perceived, rather than the big picture issues such as climate change and the effect these technologies will have on efforts to mitigate future rises in global temperatures.

Given that wind energy generation causes no carbon emissions and shale gas is a fossil fuel that emits over 500 kgs of CO2 for each megawatt-hour of electricity generated, a rational approach to policy-making in the light of the Government’s own decarbonisation targets would seem to be that there should be a presumption in favour of the former and against the latter before the local factors are considered. However, in marked contrast to the rushing out of Planning Practice Guidance that stresses that Local Authorities have a duty to make an assessment of all oil and gas resources in their areas.

The planning regime for onshore wind energy has recently been tightened.

Here again, the Liberal Democrats paper on energy policy shows a clear difference in approach to the Conservatives: “Onshore wind, currently the cheapest renewable technology, could provide up to a fifth of UK electricity consumption. In public opinion surveys wind farms consistently attract support from around two-thirds of the public, but the 10 per cent or so who are consistently opposed are usually more vocal. Liberal Democrats would require onshore wind farms to help fund local energy efficiency measures, thus reducing householders’ energy bills. Liberal Democrats would support developers who seek punitive damages against councils who do not follow National Policy Guidelines in determining consents, for example, many (particularly Conservative) councils have adopted criteria (such as minimum separation distances from dwellings), in contravention of government planning policy.”

This claim of two-thirds public support reflects the findings of a poll conducted for The Guardian in 2012, which found that 66% of Britons were in favour of wind power and only 8% against.

Indeed, a similar poll found that 60% of people would support a wind farm development within 5 miles of their home compared to 20% support for a new coal-fired power station and 14% for a nuclear power station.

Conversely, only 40% of the public support fracking in their local area with 40% saying they would oppose it.

Given that the scientific evidence on the negative impact of shale gas exploitation on efforts to curb climate change is clear, the industry’s record on localised environmental damage is far from blameless and the lack of support from the public despite efforts by the tabloid press to cast the Balcombe anti-fracking protestors as benefit scroungers and extremists who do not represent the views of the local community, it is not difficult to see why elements of the coalition government are rushing to distance themselves from their leader’s wholehearted support for the technology as a potential answer to Britain’s energy worries. We wait to see whether this will lead to a permanent split or another policy U-turn.