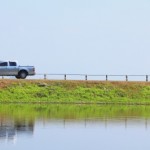 The Ford Motor Company, the second-largest carmaker in the United States, has unveiled a version of its F-150 pickup truck, for 36 years the most popular US truck, which runs on compressed natural gas (CNG). The truck will go on sale next year and will be the only half-ton pickup that can run on CNG. US demand for trucks is growing at a pace almost thrice that of the industry as a whole, propelled by the strength of the oil and housing industries.

CNG is appealing due to its low cost, courtesy of fracking, whose environmental consequences have been questioned, however the dearth of refuelling stations is an immediate concern – there are a mere 1,300 across the country, with around half open to the public. 360 natural gas stations are owned by Clean Energy Fuels Corp. The company’s vice president of the central region, Ken Nicholson, affirmed that the number would grow, however it would take time. In the meantime, he remarked, “You just have to know where they are,” and that mobile device apps and route planning could help. Quite possibly, if the F-150 is popular, it could prompt the construction of the missing infrastructure.

It’s expected that this incarnation of the F-150 will be most popular with fleets, for which natural gas pumps can be installed. This could, however, lead to retail demand. Kevin Koswick, Ford’s head of fleet operations, declared, “You’re really starting to straddle into the retail marketplace.”

According to Ford, CNG costs an average of USD2.11/GBP1.38/EUR1.59 per gallon of petrol equivalent, compared to an average of USD3.66/GBP2.39/EUR2.76 for conventional fuel. Karmically, CNG is good because it produces as much as 30 percent less in the way of greenhouse gases, according to the Environmental Protection Agency. A benefit rather stronger than karma is meeting the increasingly-stringent fuel standards of the United States.

The F-150 is the eighth vehicle from Ford to use CNG. The company said it was “on pace” to sell over 15,000 CNG-fuelled vehicles, 25 percent more than in 2012. The communications company, AT&T, recently purchased 650 CNG-powered F-350 trucks. Procter & Gamble will convert 20 percent of the vehicles it hires to natural gas within the next two years. The delivery services, FedEx and United Parcel Services, are also users.

John Coleman, Ford’s manager of sustainability and technology, trumpeted that this could mark the point that natural gas truly became a mass-market fuel for both retail and fleet customers. He said Ford couldn’t be sure how much demand there would be, but customers had been asking for it. In the last two years, the most common question he heard was when Ford would make an F-150 powered by CNG.

Kelley Blue Book (KBB) is a company most notable for its valuations of new and used cars that are an industry standard. Jack Nerard, an analyst for KBB, proclaimed that the F-150 was Ford’s most important vehicle, and “perhaps the most important vehicle, period.” It was, he said, “just an 800-pound gorilla in the marketplace.” Per Nerard, if Ford takes such a step, the rest of the truck world could follow. The widely-respected Motley Fool investment newsletter went with a headline of “Did Ford Motor Company (F) Just Put Natural Gas Into Overdrive?”