Flooded Graveyards Mean It Isn’t Possible To Bury The Dead 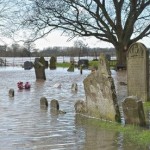 Britain is waterlogged. Groundwater is usually over 100 feet below the surface but has recently often been above it. Flooding has entailed that funerals can’t be held: it isn’t possible to bury the dead.

Graves have flooded and collapsed. Windsor and Maidenhead Council was obliged to pump flood water out of graves. At St Michael’s Church in Tilehurst, Reading, soon to mark its 825th anniversary, it wasn’t possible to bury the dead because the graveyard was underwater, and a funeral was canceled. Some cemeteries, like Redditch cemetery in Worcester, have restricted funerals to one a day. Cemeteries in Coventry, Somerset and Buckinghamshire have closed to the public. Randalls Park Crematorium in Leatherhead, Surrey, had to close for two months after never suffering from flooding in 25 years despite the River Mole running through its grounds. Graves are now sometimes dug only on the day of the funeral. Where family graves are used, people don’t wish to choose cremation instead.

Fortunately, mortuaries are able to store bodies for extended periods, but the situation has caused additional distress for bereaved families by preventing either a funeral or the visiting of an existing grave.

A funeral director in Reading remarked that his heart goes out to the families affected. Julian Walker, a funeral director, told how sometimes, when they come to bury the dead, families have had to not stand too close to graves in case they collapsed. Guy Revans, an official for a council in Worcester, complained that the problem is not merely digging graves but also damage to existing ones. At some cemeteries, worriment has ensued at the prospect of coffins being forced to the surface.

Tim Morris, chief executive of the Institute of Cemetery and Crematorium Management, declared that he’d seen nothing like it in the course of his 30 years in the industry and that there was precious little burial authorities could do until such time as the water subsides. As he explained, “You can imagine it’s impossible to excavate a grave for a funeral where parts of the cemetery are under two feet of water.” He was at least able to offer the consolation that the weather was responsible, and not people.