Earlier this month (January 2014), an innovative project was carried out regarding Cyprus’ ghost city of Varosha, which has been uninhabited and untouched for the last forty years.

With environmental sustainability in mind, around 100 participants were presented with the challenge of coming up with ideas and potential plans for what the city could become were it opened to the public once again.

Cyprus is an island with a long history of occupations and invasions, with the most recent (and expressed in a hugely simplified manner) being the Turkish invasion of 1974. The island remains divided to this day, with the Northern third under Turkish occupation. Turkish-Cypriots and Greek-Cypriots who had been living side by side were separated and displaced to the North and South sides of Cyprus, respectively, resulting in hundreds of thousands of refugees.

In the case of Famagusta, the local population fled as troops approached, with the expectation of return once the storm had passed. Although the Old Walled City of Famagusta remained open for settlement, the predominantly Greek-Cypriot coastal suburb of Varosha, approximately 6km2 in area, was fenced off. Entry to this area has since been strictly prohibited, allowing paradoxically amid the destruction and desolation, nature to reinstall itself and develop without restriction. 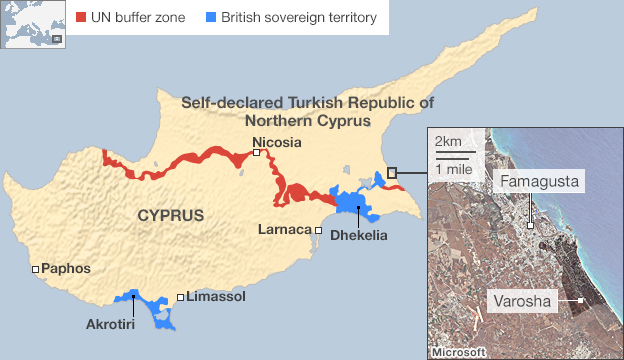 Over four days, more than 60 experts in fields ranging from civil engineering to conflict resolution, urban planning to economics, along with 5 eager groups of architecture and engineering students from Cyprus and the United States of America, came together to bring the ‘Famagusta Eco City’ Design Studio to life.

Three days of panel discussions led up to a final day of presentations by the students within the Old Walled City of Famagusta. All parts of the project included Greek-Cypriot and Turkish-Cypriot members, as well as foreign experts, rendering it truly bi-communal, and beyond that, multicultural – no mean feat considering the situation of Varosha is often labelled as the most sensitive sore point within the current political situation of Cyprus.

The project was initially conceived by Vasia Markides, an American Greek-Cypriot hailing from Famagusta, and quickly gained international support, raising over US$33,000 to fund the production of a documentary on the Design Studio.

Amongst other core individuals, renowned professor and architect from the USA, Jan Wampler, played a crucial role in the execution of the project, bringing with him to Cyprus 16 of his students. Besides recognition of this event by key individuals, such as the Greek-Cypriot and Turkish-Cypriot mayors of Famagusta (it does indeed have both), its significance stemmed from the smooth running of challenging bi-communal discussions as well as the regeneration of hope for the future within a peaceful and ecologically sustainable framework. 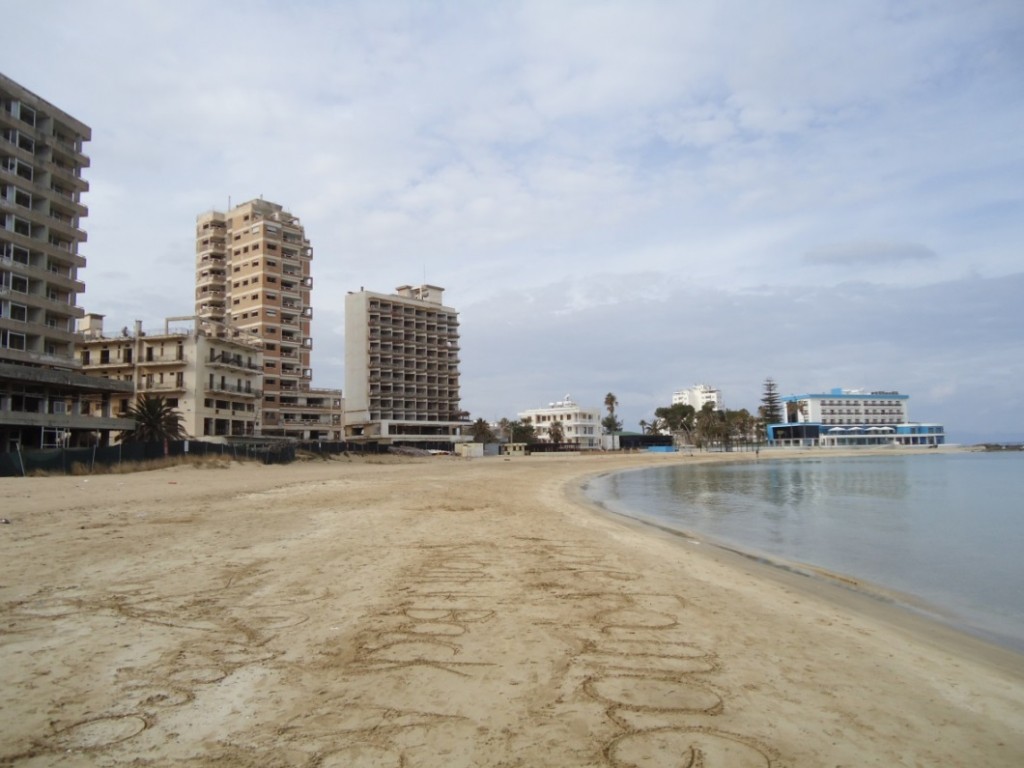 Abandoned hotels along the Famagusta beachfront

Physical Environment and Infrastructure of Varosha

Famagusta is situated on the East coast of Cyprus, with Varosha stretching along 6km of sandy coastline. Although these qualities promoted its boom in tourism in the 1960s and 1970s, rapid development of high-rise hotels by the water’s edge caused changes in sand deposition patterns and shaded the beaches from 1pm onwards.

Most of the structures appear to remain intact, but questions regarding whether such coastal development should be retained in an eco city were particularly difficult to answer.

Unique marine ecosystems also begged the question of how the sea can be managed in the least intrusive way possible.

Infrastructure, such as drainage systems, and transport systems were additionally picked out as key matters to be considered.
The five student teams came up with a variety of ideas, with certain features such as wooden piers which do not obstruct the flow of water, being favoured.

Detailed plans regarding buildings could not be made, but it was suggested that some hotels remain, as long as they are clustered, thus leaving adjacent open areas by the waterfront, to be used for recreation or perhaps to function as open markets. The necessity of green corridors and open view corridors, leading to the sea, appeared to be a common theme within all groups.

The necessity for public transport systems, in addition to a pedestrian- and bicycle-friendly city as opposed to the private car-centred Varosha of the past, was also apparent, with suggestions for tram-lines stretching from North to South and even a canal system parallel to the shore. 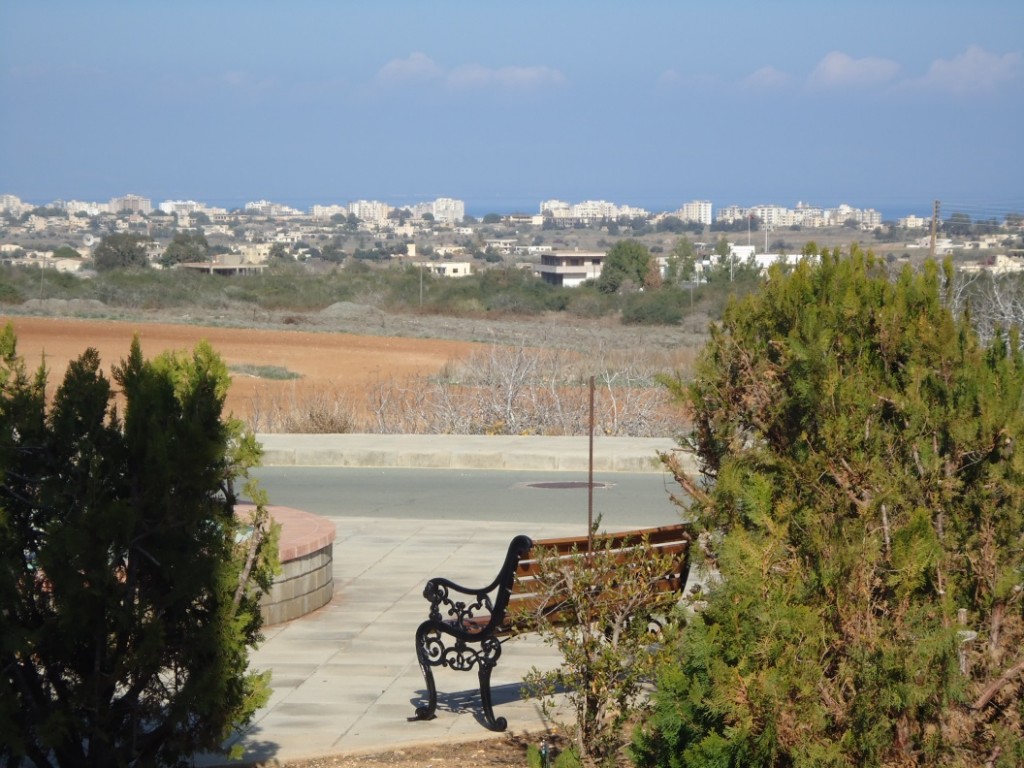 View of Famagusta from Deryneia

Besides the physical qualities of the city, there were of course inquiries regarding property ownership, and above all, issues relating to the ‘soul’ of the city, the memories and hopes of those who left, in conjunction with the requirement to design a functional city for the future.

These questions were impossible to answer at such a primitive stage – the Design Studio promoted the birth of ideas; however, Varosha may well not be opened to anyone in the foreseeable future.

Despite the many conflicting views expressed during the panel stage, the students found ways to retain a sense of community in a modern city, particularly by placing importance on plazas and other public spaces, such as churches and mosques. Urban rooftop agriculture was also pointed out as a means of cultivating community spirit while providing a sustainable means of food production.

Look-outs from piers and memorials were also tentatively suggested as ways to respect and remember the past of the city.

Questions that remained largely untackled were how to deal with the large commercial port bordering the Old Walled City, with its hopes of being declared a World Heritage Site by UNESCO, as well as how to incorporate the artificial wetlands just inland of Famagusta in the plans.

The students will continue working on the project in their respective universities over the coming year, and it is without doubt that the hope of return for the Famagustians was rekindled, with a positive vision of passing down their much-loved home to their children.