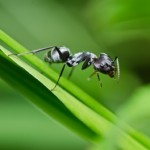 It has been predicted that there will be more than nine billion humans by 2050 and arable land is being lost to towns and cities, oceans are ever more overfished, and climate change is interfering with farming. This raises the question: Would it be environmentally-beneficial to go entomophagous and dine upon insects?

Many insects are rich in protein, fibre, good fats and vital minerals. They require considerably less land to raise than cows, sheep or pigs. They emit a great deal less greenhouse gases than livestock – think of farting cows, the source of 18 percent of greenhouse gases. Insecticides are hardly going to be a problem, as they often are in agriculture, and removing insects could easily be desirable. Farming insects could create employment in developing countries where many of the “edibles” are to be found, and this would favour women, who are traditionally given insect-collecting duties.

There are 36 countries in Africa that are entomophagous, 29 in Asia, 23 in the Americas, and even 11 in Europe. Ants taste nutty, red agave worms are spicy, stinkbugs taste of apple and tree worm is reminiscent of pork rind.

A 191-page report recently released by the United Nations Food and Agriculture Organisation (FAO) stated that 1,900 insect species are edible, and hundreds are already part of the diet in many countries: around two billion people dine upon insects on a regular basis, cooked or raw. Only in the West does the thought evoke disgust. It was, incidentally, the FAO that came up with the cow farting statistic.

The report, Edible Insects: Future Prospects for Food and Feed Security, said, “Common prejudice against eating insects is not justified from a nutritional point of view.” Eva Muller of the FAO revealed that European restaurants were offering insect-based dishes which they touted as exotic. The Danish restaurant, Noma, was named as the world’s best for three consecutive years in one poll, and is renowned for using ants and grasshoppers. In a blind test, nine out of ten people preferred meatballs that had been made half from meat and half from mealworms to those made purely of meat.

Beetles are efficient at turning the cellulose in trees, which is inedible to humans, into fat, and contain more protein than most other insects. The most oft-eaten kinds are dung, june, long-horned and rhinoceros, which are used as food in heavily forested regions such as the Amazon basin and parts of Africa. It’s said that Native Americans roast them over coals and eat them like popcorn.

While butterflies look so pretty as they flutter by, in their larval and pupal stages they’re succulent and abundant with iron and protein. They’re highly popular as a snack in Africa, providing nutrients to pregnant women and children who may not be adequately provided for in this respect. In Central and South America, the agave worms that live in agave plants and turn into butterflies are much sought for food. Then there’s the famous worm found in mescal, the Mexican alcoholic beverage.

Bees have more to give than just honey. Native peoples in Australia, Africa, Asia, Mexico and South America frequently eat them before they reach maturity. Stingless bees are the most frequently-eaten, and taste like peanuts or almonds, and wasps come a distant second, tasting of pine nut.

100 grammes of red ant provide 14 grammes of protein – more than eggs – in addition to almost 48 grammes of calcium, not to mention iron and other nutrients. They have under 100 calories and are low in carbs.

Grasshoppers and the like are the most commonly-eaten kind of insect, probably because they’re everywhere and easy to catch. They contain much protein. Having a neutral flavour, they pick up other flavours well. Do you fancy some cricket curry? Since locusts devastate vegetation in countries where food is a problem, there’s even more reason to make a meal of them.

Flies and mosquitoes are less popular as food than other insects, but would be a worthwhile presence on a plate. Flies that develop on cheese assume the flavour of their environment, while species found on water can taste like fish or duck.

If you find the idea of eating insects repulsive, you may like to know that you’ve already done it. Cochineal is a widely used food dye derived from an insect, dactylopius coccus, that is found in South America and Mexico and lives on cactus plants. The dye is red because female insects eat red cactus berries. Cochineal was found in Smarties until a few years ago when use ceased because cochineal is an animal product – red cabbage is now employed instead. Starbucks recently took the same course.