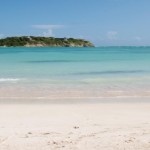 Aruba is an island settled in the Southern Caribbean on the fringes of the hurricane belt close to South America, the island is just a two-and-a-half hour flight from Miami and a four-hour flight from New York City and boasting year-round cooling trade winds and an average 82 degree temperature.

Commonly described as “One Happy Island” the island has announced that plans to become the worlds first 100 percent sustainable energy economy are on track. This plan has been in place following efforts to reduce dependency on fossil fuels and CO2 emissions. Aruba built its Vader Piet Windmill Farm in the winter of 2009. This wind turbine farm currently supplies 20 percent of the island’s energy, and a second wind farm, which would double the sustainable energy provided, is in progress in order to boast the islands energy sustainability.

Aruba’s prime minister, Mike Eman, teamed with the Carbon War Room, an organization started by the entrepreneur Richard Branson that is dedicated to reducing carbon emissions worldwide, in 2012. Together they’ve set the goal of running on 100 percent renewable energy by 2020. There are four main objectives to increasing energy sustainability within Aruba; electrifying all public transport, substantially increasing renewable energy generation, making those resources available upon demand with distributed, environmentally-friendly energy storage and a nation-wide plan for public re-education and Aruba energy sustainability programs in all schools.

What makes Aruba the ideal location for experimenting with renewable energy options are also the same reasons it one of the most revisited destinations in the Caribbean; the constant supply of sunshine, ocean currents and a strong breeze are optimal for research and field-testing of renewable energy technology options to reduce Aruba’s carbon footprint. Together with Carbon War Room this will transition the island to 100 per cent renewable energy while eliminating any reliance on fossil fuels, creating a shining example for other countries to replicate. Harvard Professor George Baker said “The opportunities for renewable development on Aruba are really extraordinary. Aruba could truly be a model to the world in terms of a sustainable place to live and work.”

In addition to pursuing alternative energy initiatives, locals and visitors alike join together for the Aruba Reef Care Project, the island’s largest volunteer environmental initiative. The project has attracted more than 800 people annually since 1994 and results in cleaner reefs, public beaches and shallow waters. More evidence to its commitment to sustainability is the island’s several certified and sustainable hotel and resort properties. EarthCheck, the premier international certification alliance for sustainable travel and tourism, complies with the Intergovernmental Panel for Climate Change (IPCC) guidelines regarding greenhouse gas emissions.

By 2020 Aruba will be the first energy sustainable economy in the world providing a model dedicated to reducing carbon emissions worldwide.

Hello Sustainablebusinesstoolkit,
Speaking of which, What are the most important challenges for the current and future generation.
1. Sustainable development like preserving water resources, forests, and environment.
2. More food production to feed ever growing population like agriculture jobs.
3.creating clean energy to fight against climate change and reduce the dependency on fossil fuels which will help a lot for developing economies like India and china.
Out of three which one you will choose as your career. your views based on earnings, recognition, reputation in society and satisfaction.Only some wise and sincere answers.
Catch you again soon!