Dudley’s Lousewort and the Boy Scouts of America 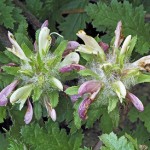 It took more than a century for the Boy Scouts of America (BSA) to openly admit homosexuals as scouts, although they are still not permitted as troop leaders. There is another way in which the organisation should be opposed: it threatens the extinction of pedicularis dudleyi, otherwise known as Dudley’s lousewort, a fern-like plant so-named because it was once believed to cause lice infestation in livestock.

Kim Kuska is a one-time biology teacher whose membership of the BSA spanned more than half a century. When he applied to renew his membership in 2012, he was declined sans explanation – he was expelled.

Kuska’s offence was to be obsessed with preventing the demise of Dudley’s lousewort at the Camp Pico Blanco Scout camp that is situated in the Los Padres National Forest by the Little Sur River, south of Monterey, California and was established in 1953. Kuska was the camp’s nature director. Around the camp are found almost half the known specimens of the plant, with the remainder at two other locations in California.

Ron Schoenmehl, the director of support services for the BSA’s Silicon Valley Monterey Bay Council, later accused Kuska of planting lousewort seeds in places where it didn’t already grow, some of which were high-traffic areas, which would mean that these locations would have to be protected.

Scouts have often endangered the existence of Dudley’s lousewort by harvesting the old-growth trees it requires. Some of the trees would have been in excess of 200 years old. State law prohibits damage to rare plants, which a Scout official admitted had occurred and which is being investigated by the California Department of Forestry and Fire Protection. Scout culpability is evident from photographs posted to one Scout’s Facebook page which showed wood cuttings atop louseworts.

Kuska recorded all the misdeeds he observed in the course of 30 years. Before he was expelled, he planted an orange flag by a lousewort close to a dining hall, which didn’t prevent someone from rolling a wheelbarrow over the plant. Kuska then surrounded the plant with fist-sized rocks, which somebody moved onto the plant. This was, he said, “an unbelievably hostile move.” He added, “Someone needs to be protecting this plant. Somebody’s going to have to defend it.”

The Scouts’ environmental malefactions don’t end with Dudley’s lousewort. In 2009, it was reported that a dam erected by Scouts at Camp Pico Blanco killed at least 30 steelhead trout, which are federally-protected.