Should you be going demitarian? 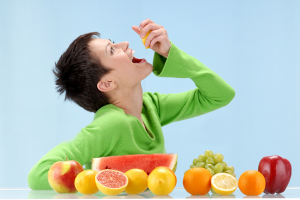 Relax. Going demitarian doesn’t require you to dine on Demi Moore. It is, instead, the practice of eating half as much meat and dairy products as you commonly do. A forthcoming UN report advises that people should do just that to reduce carbon emissions and air and water pollution. People taking the demitarian avenue would lessen the greenhouse gases generated by agriculture by between 25 and 40 percent, and these constitute nine percent of the British total.

Europeans consume eight ounces of meat a day, while Americans eat 12 ounces. Less was consumed 10 years ago and even less 20 years ago, and 80 percent less was eaten 100 years back.

Going demitarian would also make people healthier, reducing the saturated fats eaten by the average person by half and so lessening the risk of obesity and heart disease, the latter of which claims 31,000 lives a year in the United Kingdom. The NHS could save USD2/GBP1.2/EUR1.5bn annually. In Europe, the average intake of saturated fats is 42 percent above the maximum recommended level. 80 percent of the saturated fats people ingest are from animal products. And then there’s the salt. Professor Mark Sutton of the Centre for Ecology and Hydrology, a co-author of the UN report, declared that the health benefits of demitarianism outweigh the environmental ones. Professor Sutton is himself a demitarian and coined the word.

In the face of people going demitarian, the meat and dairy industries, of course, would complain bitterly – not just farmers but those involved with the production of feed and processing of meat and dairy products. Grassland would go unused but could instead be employed to grow crops for cereals or biofuels. Imports of soybeans, used mainly to feed livestock, would drop by 75 percent.

The European Union is already set on reducing greenhouse gas emissions and has taken steps like the elimination of incandescent lightbulbs. Meat could be taxed, which could be more effective in changing people’s behaviour than taxes on alcohol, tobacco and petrol because substitutes exist.

Demitarianism would be a great undertaking, but as Professor Sutton put it, 20 years ago nobody would have expected such a large reduction in smoking. The horsemeat scandal has already made people wary of meat. The benefits would extend beyond Europe if there were a ripple effect in countries like China and India, compared to exhortations that go ignored. Since going demitarian would help save the world, perhaps it isn’t such a massive price to pay.