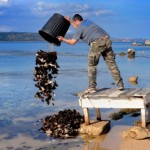 The Great Pacific Garbage Patch is a collection of rubbish thought to have originated on the beaches of California that now floats close to the ocean’s surface north of Hawai’i. It may be twice as large as Australia.  Considerably less is known about what sinks to the bottom of oceans.

A study recently conducted by the Monterey Bay Aquarium Research Institute (MBARI) and published on May 28 in the journal Deep Sea Research Part I: Oceanographic Research Papers went as far as 13,100 feet beneath the surface in areas between Canada’s Vancouver Island, the Gulf of California and west of Hawai’i. Debris was found at more than 1,000 locations, generally where currents flow past obstacles such as rocky outcrops.

Kyra Schlining, the lead author of the study, said it covered a longer time period and included more observations than any other of which she was aware. 18,000 hours of video collected over 22 years by remotely operated vehicles that cost between $10,000 and $20,000 a day was entered to the Institute’s Video Annotation and Reference System (VARS) and then studied.

With little sunlight, temperatures close to freezing and scant oxygen, the growth of bacteria and other organisms that can break down the trash is limited. Plastic bags and aluminium cans can endure for decades. Cans and bottles can contain chemicals that poison all sorts of animal. Trash on the seafloor included wood, kelp and natural debris that came from land, leading to the conclusion that much of the rubbish originated from land, rather than seagoing vessels.

MBARI conducts more than 200 research dives every year at Monterey Bay. In just this region, over 1,150 pieces of debris were found on the seafloor, often collecting on the steep, rocky slopes found there.

Pictures of the litter can be seen online.

A third was plastic, and half of this was plastic bags that can smother or choke living things. A deep sea coral living almost 7,000 feet from the coast of Oregon was seen to have a black plastic bag wrapped around its base, which will ultimately kill it. 23 percent of the trash was metal, of which around two thirds was steel, aluminium, or tin cans. Other common items were cloth, paper, glass bottles, rope and fishing equipment. While the MBARI study found less fishing gear than previous studies, this was the most obviously pernicious presence, with animals sometimes observed trapped by it.

Fishing gear, shoes and tyres represent a profound change for deep sea marine life. The environment is mostly soft mud, with hard surfaces a rarity. Animals can use debris as shelter or a hard surface to which to anchor: a discarded tyre could provide a home for sea creatures 2,850 feet below the waves. Marine debris is changing natural biological communities.

Schlining was surprised to see so much rubbish in deeper water. People, she said, weren’t aware that their daily doings could exert an effect two miles underwater. She believed that there was much more debris that escaped attention, because it gets buried by underwater landslides and the movement of sediment. Only 0.24 percent of Monterey Canyon has been explored.

Schlining said the most frustrating aspect was that most of the material found, like plastic, paper, metal and glass, is recylcable. She remarked that she and her co-authors hoped their findings would prompt seaside residents and ocean users to be more careful with their trash and recycle it where possible, so that it doesn’t find its way to the depths of oceans. Retrieving all that rubbish would be costly and could cause more damage than leaving it in situ, so the best solution is to not allow litter to enter the marine environment in the first place. The report stated that increased public awareness is the most cost-effective remedy to the problem. Most of the pollution was in the form of single-use products such as plastic bottles and cans, so people wouldn’t have to change their behaviour drastically before an effect was felt.

This is exactly why our two young founders created their weeklong Plastic and recycling Awareness Curriculum:

Check it out and let us know what you think.

Good article and I agree with most of the information. I would like to add that debris entering the ocean comes from many other sources besides just the coast of California. If we spend time educating ALL of the coastal areas surrounding the North Pacific Gyre, then we will have better results.

I am doing my share. I am on the executive committee of the Surfrider Foundation and we work with local schools with a watershed responsibility message that everything eventually ends up in the ocean if it is not disposed of properly for reuse. Remember the 4 Rs. Refuse, Reduce, Reuse and then Recycle.