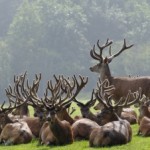 There has been a recent call to cull 50% of the UK’s entire wild deer population, provoking an outcry among animal rights groups and some environmentalists. However, the cull is being supported by farmers and other environmentalists. An even more controversial cull on badgers has already been sanctioned by the UK’s Ministry of Agriculture. Elsewhere, culls on iconic species such as elephants and great white sharks have been carried out or proposed as a means of sustainable management of wild animal populations.

But what is the value of such culls and do they achieve their stated objectives?

In the case of the deer cull, the proponents suggest that the UK’s deer population has boomed in the absence of natural predators. This has been compounded by the introduction of non-native species: Japanese sika deer in 1860, Reeve’s (Chinese) muntjac in the early 1900s and Chinese water deer in the 1920s. This growing deer population is damaging woodlands, hindering forest re-growth and destroying crops.

There can be no doubt that in the absence of natural checks on population growth (in the form of predators or restricted resource availability), animal density can spiral out of control. Such populations do need some form of sustainable wildlife control . Personally, I feel such culls should focus on the non-native species – such invasive species have no place in the British countryside, where they contribute to habitat degradation and also endanger the genetic integrity of native species such as red deer.

But what of the case of the badger cull in parts of England?

The rationale behind the cull is to limit the spread of bovine tuberculosis (TB); a disease that is endemic in badgers and costly for farmers. However, despite intensive investigation, it has not been conclusively shown that badgers are the main contributory cause of localised outbreaks of bovine tuberculosis in cattle herds. It is more likely that transmission between cattle is the culprit, given the rates of false-negative results returned from standard TB tests.

Furthermore, the evidence does not appear to support culling as a viable means of managing bovine TB transmission. Although there can be an immediate decrease in incidences of the disease, in the longer-term the risk of TB transmission actually increases as neighbouring badgers move into the vacated territories of culled badgers. Alternatives to culling do exist; in Wales, where badger density is similar to that of England, vaccination is instead being used as a means of controlling TB. The badger cull is a real example of politicians ignoring scientific information to placate farming lobby groups with ill-advised policies.

South Africa’s policy of culling elephant populations in Kruger National Park and elsewhere generated debate for decades. While the culls were halted in the 1990s due to global pressure, the moratorium was lifted in 2008, paving the way for culls to re-start. How can the culling of a species that is globally recognised as endangered be supported?

The fact is that, in some locations, conservation efforts have been a victim of their own success. Elephant populations can increase so much in parks where they are protected that they become unsustainable. Not only do these large populations cause huge environmental damage to their own habitats and thereby endanger other species, it forces elephants to wander outside of park boundaries to find food causing conflict with farmers. In such cases, a cull based on ethical and scientific considerations can be deemed appropriate.

An alternative option, by means of contraceptives, has been tested in South Africa and has been deemed successful, but does not have universal support. While contraceptives avoid the need to kill entire elephant families and are probably most appropriate in small parks, they are expensive on a large scale, they have to be re-administered annually and they do not solve the problem quickly enough where populations are already far too large. Thus, even for globally endangered species, localised culling can be a feasible and sustainable management tool to safeguard habitats and limit conflict with humans.

In response to a spate of shark attacks in Western Australia in 2012, there was a call for a shark cull to be initiated to reduce the threat. Great white sharks were deemed to be the species responsible for many of the attacks, but it is a protected species under Australian law. Ultimately, under pressure from environmental groups, the Australian authorities decided against a systematic cull, but have put in place a system of pre-emptively killing great white sharks that come too close to public beaches. Again, this is a case of a government policy that is not based on scientific evidence, but is driven by the need to be seen to respond by any means to a perceived public threat.

In general, sharks of all species do not view humans as a prey item – there are only approximately 100 shark attacks worldwide per year, of which less than 20% are fatal. Instances of shark attacks are probably caused by transient or young inexperienced individuals. However, targeted killings of great white sharks are likely to be biased towards larger reproductive females that are easier to spot. Thus, not only will this policy probably promote transient shark movement into these waters, but it will have a huge negative impact on the demographics of the species in the region. The money set aside for this policy would be better served in public education campaigns; advising people to undertake aquatic sports in groups and in supervised areas.

While the decision to kill any animal should never be taken lightly, it is the unsustainable actions of humans that have placed wildlife in the firing line. With the on-going growth of human populations, the probability of conflict with wildlife is only likely to increase. Combined with the fragmentation of natural habitats that disrupts normal population structures, wildlife will increasingly have to be managed sustainably to ensure their survival. In some cases, culling can be a feasible element of a sustainable management plan, as long as it is science-based and ethically administered but, where cost-effective and long-term alternatives exist, these should be preferred.

In the case of the deer cull, the way this has been reported gives the impression that there needs to be a massive one-off cull of wild deer. In fact, around 350,000 wild deer are culled annually (according to the British Deer Society), so culling 700,000 as called for in the UEA report would represent a doubling of the current number. This sounds a lot but, if the management structures are in place, just think of this as every deer manager who shoots one animal a year shooting two, then it is not so dramatic. Red and Row Deer are native to the UK. There is now evidence to suggest that Fallow were here before the last Ice Age but did not naturally re-colonise, being introduced again by the Romans and/or Normans. The other three spoecies now found in the wild – Sika, Muntjac and Chinese Water Deer – are all alien. Sika Deer can interbreed with Red Deer threatening the genetic integrity of the native breed, as alluded to in the article. In the case of all these deer, Man is the cause of the problem either through exterminating the native predators, needing a bigger share of the available habitat for farming or introducing alien species.

Contraceptive vaccination works. I have been delivering contraceptive vaccines to wild mountain ponies in Wales with great success. Problem is deer have a commercial value, stalkers pay for and enjoy the privileged of shooting them. I use remote delivery via dart rifle. Stalkers will say this is not viable and come up with many reasons why contraception wont work.
In America a product has been developed specifically for control of the white tail deer. The results are very positive. It is a one shot vaccine which gives 3 years protection.