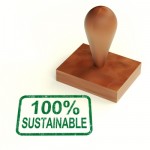 Slajov Zizek, in his lecture, First as Tragedy then as Farce, states that ‘in our economy charity is no longer just an idiosyncrasy of some people, but at once its basic constituent’ .

Zizek points out that in today’s Western capitalist society the tendency is to bring together the two dimensions of consumption and an anti-consumerist / pro environmental sentiment. Zizek sites Starbuck’s explicit campaign of what it is ‘you are buying into’. This is of course their coffee ethics. Their ‘shared planet programme’ allows them to purchase more fair trade coffee than any other company in the world, whilst they also invest in and improve coffee growing practices and communities around the world.

Of course, Starbucks are not alone in their pursuit of a commendable CSR policy, the list is endless.

The fair trade logo on perishable items gains ground on a seemingly weekly basis, whilst IKEA plug their FSC certified wood, the very same logo that I can see on the back of my RIVER ISLAND receipt lying next to the keyboard as I write this.

The European Commission even has a product policy section on its website which states that ‘the core of the Action Plan is a new product policy which rewards consumers’ eco-friendly behaviours and producers’ best products’, whilst encouraging the labelling we diligently scan the shop shelves for. And why are we so consumed with these types of products? Is it that we believe that they inherently possess a greater quality than their competitors? Zizek defines the desire to purchase that expensive fair trade coffee or that organic vegetable as a self congratulatory mechanism which provides a ‘warm’ feeling in the knowledge that we have in some small way helped the planet sustain itself.

However, Zizek offers that our desire to cure the world of its various ills, from inequality and poverty to disease, is in essence a defective cog in a broken machine. Efforts to keep the poor alive or (as is the case in slightly more advanced areas of the world) to entertain them, are merely perpetuating the problem. It is capitalism, he maintains which is responsible for these ills and that the plugging of the societal ship’s holes with cotton wool represents a certain hypocrisy.

But what is the alternative?

Zizek does not disagree with charity in an abstract sense. Nor is he a proponent of communism. He does however seem to lack any legitimate solution. I would also contend that his attack on society’s hypocritical, consumerist motivations seem to disregard products, services and businesses which feed back into alleviating environmental issues.

Whilst the state of political governance over humanity throws up contradictions and pitfalls, there are aspects to environmental conservation which are altogether of a far more simple nature, namely, avoiding interference, overuse and destruction of the natural world.

Regardless, the lecture can be seen as a staunch attack on philanthrocapitalism, a phenomenon which Tristram Hunt sees as an effort to ‘repurpose business methods and business culture to solve the world’s problems‘. However, Hunt describes the mindset of the philanthrocapitalist as having ‘little engagement with the kind of structural injustices – racial, economic, social – or broader environmental, demographic or strategic challenges that require political advocacy‘.

This issue is a logical barrier when one considers that proponents of the concept have made their riches from the existing free-market model, and would be little inclined to perceive a need to confront its problematic aspects. And, given their accelerating influence in media and government, such an approach closes down a broader ideological debate.

But, is CSR a bad thing ultimately?

Timothy Devinney offers that ‘the holy grail of CSR—“doing well by doing good”—is an illusory goal that is noble in spirit, but unachievable in practice‘. Although, he concedes that ‘CSR may not be de facto good or bad, because like any other organizational instruments, it is neutral until used in a specific context by interested actors‘. Essentially Devinney suggests that a corporation may increase its virtuosity in certain respects of its corporate structure, but that these positive elements are often counterbalanced by some price or cost in other areas.

One way this reshuffling of responsibility is achieved is when corporations skew societal standards to meet their own needs. A classic example of this as Devinney points out, is how the Multi-Fiber Arrangement which was introduced to allow developed countries to adjust to imports from the developing world, actually served to protect those in the industry it was supposed to regulate by giving primacy of decision making to Western labor unions, purchasers (such as Nike and the Gap) and Western NGOs, while controlling the global market for textiles through production quota allocations from developing countries. An IMF study revealed that the system has cost the developing world 27 million jobs and $40 billion a year on average in lost exports.

Devinney also points out that CSR can be used as a competitive weapon by creating new standards in CSR culture and then lobbying for these new standards to be met across a specific industry. This was the case for a small mining company who complained that their global competitor was disadvantaging their business by lobbying for expensive new standards which were out of financial reach of smaller competitors and were then also complicit in attempts to buy up those smaller competitors when their value dropped.

This behaviour has also been documented by Maloney and McCormick’s 1982 study of the application of the U.S. Clean Air Act regulations. They showed that the regulations were not only a benefit to environmentalists but were structured in such a way as to serve as an effective barrier to entry, which benefitted established manufacturers over new foreign and domestic competitors by requiring them to meet more stringent and costly standards.

What to make of these cases against CSR

The picture that emerges from these two examples is that whilst CSR can be well intentioned, it has the capacity to benefit elites and disadvantage SMEs or those competitors with financially less clout. This is an unavoidable fact when one considers that a corporations primary objective will always be to exact rents and make a profit. If a CSR can benefit this goal or at least work in tandem with it, then it is always going to be an attractive albeit scrupulous option.

However, Divinney also points out that just as in the Stanford prison experiment conducted by Zimbardo in 1997, corporations and organisations form social contexts which can have the capacity to influence bad as well as good behaviours. It is very likely that the auditors and safety personal that shared responsibility for the BP oil spill for example were morally no different to ourselves.

Devinney calls for a need to define and identify societies (as opposed to just stakeholders) and realise the relevant responsibilities and how they map onto the needs and demands of those societies. Baumol and his colleagues (1996, 2007) noted that the assumption that all innovation is welfare enhancing is a myth and that there is “good” and “bad” innovation, the former rent-creating and the latter rent-redistributing. This aspect of CSR implies a need the political economy surrounding the social dimension of the organization and how the current developments have been used for competitive enhancement and positioning versus monopolistic and oligopolistic exploitation.

Knowing how and where legitimate competitive flows differ from the flows related to exploitation of a CSR position is critical yet completely unexplored with any degree of scientific rigour. There are limited studies which examine closely how CSR flows through to capitalised performance measures. Divinney suggests that the triple bottom line approach provides a template that should be applied more consistently to such studies to ensure a positive performance from a financial, social and organisational perspective.

It is my proposal that there needs to be a greater academic pressure applied to the corporate world before any regulatory bodies can begin to tackle the issues within CSR successfully.

About the Author Theo Marson

Théo Marson holds an MSc in Sustainable Urban Management from Malmö University, Sweden. He is currently residing back in his home city of London, where he works part time as a Learning Support Assistant at a local primary school. During his time off Théo supports Ground Work, an NGO charity, with sustainability projects around London. He is currently involved in garnering opinion and input from local residents with the aim of regenerating green space in the Wandle Valley Regional Park.