What should a cruise ship do with its crock of sh**? 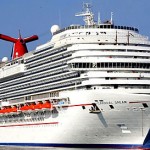 Cruise ships have had very well-documented problems with sewage. Carnival Cruise Lines owns 24 cruise ships, the largest fleet in the world, while its parent company, Carnival Corp, owns another six cruise lines. In February, passenger, Toby Barlow, told how on Triumph, a ship owned by this company, there was “sewage running down the walls and floors” and passengers were asked to defecate into plastic bags and urinate in showers when there were a mere five working toilets available to the 4,200 people aboard.

Carnival’s bad luck didn’t end there, and the next month it was obliged to fly passengers home when the toilets of one ship, Dream, overflowed and power outages occurred. One passenger, Gregg Stark, spoke of human waste sloshing on the floors of some of the ship’s bathrooms. But sewage is a problem even under normal circumstances.

There were between 200 and 300 cruise ships active in 2012, mostly operating 24 hours a day all-year-round. These ships can discharge only treated wastewater within three miles of shore, but are able to just let loose with sewage – termed “black water” – beyond that limit. The US Environmental Protection Agency (EPA) estimated that the average cruise ship, holding 3,000 passengers and crew, generates 21,000 gallons of sewage a day, which could fill 10 backyard swimming pools in a week. The EPA believes that over a billion gallons of raw sewage was released into the seas last year. This is likely to be conservative now that ships can carry as many as 8,000 people.

Diarrhea, gastrointestinal diseases, hepatitis and other illnesses can result when people ingest seafood or water contaminated by sewage. Aquatic life can suffocate due to the nitrogen and phosphorous of sewage.

Some cruise companies are better than others. Every year, Friends of the Earth (FoE) releases a Cruise Report Card, with the 2013 edition giving Disney Cruise Line, Celebrity Cruises, Cunard Cruise Line, Norwegian Cruise Lines, Royal Caribbean International, and Seabourn Cruise Line a rating of A for sewage treatment. Cunard and Seabourn are owned by Carnival Corp. Carnival, Costa, Crystal, MSC, P&O and Silversea all received an F. Individual ships are also rated.

FoE’s Marcie Keaver advocated that governments should lay down stricter regulations so companies couldn’t hide behind weak regulations. FoE said that more than 40 percent of ships employ 30 year-old waste treatment technology. Meeting more stringent regulations wouldn’t be hard for the multi-billion dollar industry. Keaver pointed out that the most advanced technology available for sewage treatment could be installed for the cost of one can of Coke per passenger.

Passengers can reduce the problem by consulting the Report Card prior to booking a cruise, not tossing litter overboard and minimising water use.