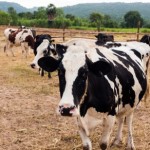 As if it weren’t bad enough that methane warms the planet 23 times as much as carbon dioxide, a further danger became apparent on 27 January in the town of Rasdorf in the state of Hesse, central Germany, when the methane produced by 90 cows caused an explosion that blew the roof off a cow shed.

It’s not known why methane accumulated to such an extent. The explosion was sparked by a static electric charge from a massaging machine that increases milk production, according to local police. One cow suffered minor burns. Firefighters took gas readings to ensure there was no additional danger from all those cow farts.

Cows produce as much as 110 gallons of methane a day, with the estimates of experts varying wildly. Cow farts are responsible for a mere one percent, with the rest coming from belching, but we can adopt a tabloid style and still blame cow farts for the Rasdorf explosion.

Dr Andy Thorpe, an economist from Portsmouth University, told how a herd of cows emits more greenhouse gas in one year than a car produces in the course of driving 3,000 miles, which would consume more than 4,700 gallons of petrol. He added that while CO2 emissions have grown by 31 percent in the last 250 years, methane has increased by 149 percent. Like CO2, methane has increased exponentially in the developing world as incomes rise and there’s a greater demand for meat. Up to 75 percent of methane emissions from animals arise in developing countries, with India and Brazil at the forefront.

Methane produced naturally is odourless, with the foul smell present only when it’s commercially-produced. Human farts smell because of gases that contain sulphur, and those of women are smellier. Methane is flammable when it constitutes between five and 15 percent of the air in a room, which can only occur when ventilation is poor. Measures to reduce methane emissions other than ensuring adequate ventilation are using different feed, selective breeding and vaccinations, but research is at an early stage.

The Rasdorf episode was reported widely online, including by the BBC, the Indie, MSN, the Daily Hate, Huffpo, Reuters, UPI, the online magazine, Salon, TIME and even the blackshirts of Worldnetdaily. Online, Modern Farmer magazine was alone in attributing the methane build-up to slurry made from cow manure to be used as fertiliser, citing a later article by the local newspaper, Humnfelder Zeitung. Via Twitter, Modern Farmer heard from Tim Zweber, the manager of an organic dairy farm in Minnesota, who stated that it would be “really hard to believe” that cows could produce sufficient methane through digestion, as cows would suffocate in such an airtight building. But cow farts are such a critical subject that discussion is warranted and the methane still comes from cows, so let’s ignore them.