Does Corporate Zoo Sponsorship Make A Real Contribution To Conservation? 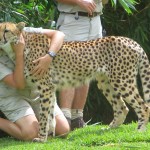 The concept of corporate zoo sponsorship has been around for quite some time. Typically, it involves a once-off or annual payment to an individual zoo in return for some form of company exposure (on-site and/or via publications and the zoo website). While the proportion of most zoos’ incomes derived from corporate sponsorship is generally small, the question remains as to whether this type of funding is ethically used.

The benefits of zoo corporate sponsorship for contributing companies are clear. Zoos enjoy immense public popularity and are among the most popular visitor attractions in the areas where they exist. Over 175 million people visit the more than 220 institutions affiliated to the American Association of Zoos & Aquariums each year. In each of the past two years alone, over 1 million visits were made to Dublin Zoo; incredible for a city of 1 million in a country of just over 4 million. The potential exposure to the public offered by zoo sponsorship is largely unmatched by other sites and, in many cases, is a lot more cost-effective than, for example, stadium or billboard sponsorship because it is less well-developed. Thus, companies can expect greatly expanded brand awareness, potentially increased sales volumes and heightened image (related to perceived social responsibility and community involvement) in return for what is often a tax-deductible investment in zoos.

Although it remains undeveloped, zoos have contrived a number of innovative means to encourage corporate sponsorship, such as naming rights to newly-born or newly-arrived animals, exclusive or preferential product placement in retail and catering outlets, advertising space in zoo publications or other media, etc. But what do zoos use this money for? A cursory examination of the corporate sponsorship webpages of some of Europe’s zoos suggests that, in many cases, it is subsumed into the general operating budget of the zoo. This means that corporate sponsorship is often being used to pay wages, cover overheads (electricity, waste, water, etc.) and other mundanities of any typical business operation. In itself, this might not be considered an issue, except if the zoo does not meet basic husbandry standards.

Despite their undoubted popularity, the question as to whether keeping animals in zoos is ethical and whether they actually have a role in conservation remains a recurrent controversy. It is clear that, in some cases, zoos have been the undoubted saviour of certain species, such as scimitar-horned oryx, Bali starling and black-footed ferrets. Such efforts are to be commended but, of course, they tend to prioritise the greater good of the species over the welfare of individual animals. Additionally, the conservation benefit of maintaining populations of non-threatened species is less obvious. It could be argued that, for example, zebras are talismanic of Africa and, thus, act as ambassadors for wildlife conservation. However, again, this overlooks the welfare issues of the individual animals. More worryingly, the continued existence of sub-standard zoos purporting to be conservation institutions undermines the credibility that conscientious and ethically-minded zoos strive towards. The plight of animals in such “institutions” cannot be ignored and more should be done to close down such locations.

Fortunately, nowadays, there are guidelines in place in most areas to regulate zoo operations. These regulations, such as EU Directive 1999/22/EC, serve to ensure that animal welfare standards are adhered to. In addition, non-legally binding guidance documents, such as the World Zoo Conservation Strategy, prompt zoos to concentrate their efforts in the areas of education, conservation and animal husbandry. However, adherence to such guidance and even legally-binding legislation is severely lacking among some zoos, both in Europe and elsewhere.

Thus, companies that blindly donate to zoo sponsorship schemes may be doing their corporate image more harm than good. As a first step, companies should ensure that the zoo is licensed and is a member of a regional zoo association, such as EAZA, AZA, Zoo Aquarium Association, etc. While membership of such associations does not always guarantee adherence to basic animal welfare standards, it often does suggest some oversight (regulatory or peer-based).

Secondly, companies should demand that their sponsorship be funnelled into legitimate conservation or research activities. According to EU Directive 1999/22/EC, all European zoos must engage in such activities to some extent to retain a licensed status, and the World Zoo Conservation Strategy considers such activities as two of the pillars of zoo operations. Alternatively, sponsorship can be specifically targeted to improvements in animal welfare (for example, by funding upgrades to animal exhibits); indeed, funding of this type can be invaluable to small zoos that may not have the means themselves to undertake extensive enclosure renovations.

Thirdly, companies must review their sponsorship contract on an annual basis to ensure that the funds have been used as agreed and that, in general, the zoo is improving its welfare standards.

Overall then, companies can consider zoo sponsorship as a viable means of public exposure, as long as the zoos they invest in are committed to improving animal welfare standards and are involved in conservation, education and research activities. For their part, zoos could further develop partnerships with local companies to fund enhancements of animal facilities and to become more active in local and international conservation efforts.