Corporate Responsibility – Where’s Your Ethics At? 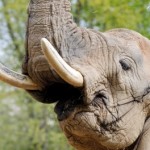 Recently, the Environmental Investigation Agency took Google to task about the selling of ivory products on its wholly-owned Japanese shopping website. The censure related to over 10,000 advertisements for such products. Last year, the International Fund for Animal Welfare reported on a similar and even more extensive problem with various Chinese websites.

However, this is not an issue restricted solely to the Far East – following a cursory check, I found an ivory statue being sold on the UK’s eBay site today (25 March, 2013). No doubt, many other such items are being sold worldwide on internet sales websites, either openly or under the guise of “faux ivory”, “fake ivory” or “marfim” (the Portuguese word for ivory).

CITES, TRAFFIC, UNEP and IUCN (all organisations that monitor trade in endangered species and their by-products) estimate that the ivory trade has doubled since 2007 and tripled since 1998. In 2011, an estimated 17,000 elephants alone were killed in CITES-monitored sites. These sites are home to only 40% of the total African elephant population, suggesting that the slaughter has been much greater.

Such sobering data highlights that current efforts to curb this trade are having no impact at all.

Having such easy access to the market via the internet is clearly a contributory factor. Her Excellency, the Prime Minister of the Kingdom of Thailand, Yingluck Shinawatra, must be commended for stating at a recent conference that she would initiate legislation to end the ivory trade in her country. This is significant since Thailand has proved to be a major transit point for poached ivory. However, legislation exists in many countries to limit the trade in endangered species by-products, and yet it continues unabated. And while the market for ivory and other animal by-products is predominantly Asian-centred, the trade is a global problem. For example, recently it was reported that an Irish gang was behind a spate of rhino horn thefts in Europe – another illicit trade that is of massive concern.

While, perhaps, internet sales companies cannot be accused of creating the demand for ivory products (that demand would probably exist with or without their websites), they are guilty of facilitating a market-place for exchanging such items. China is the largest market for these illicit products and, coincident with its economic progress and greater internet penetration, the market there is booming. Both Google and eBay state that the sale of ivory products on their websites (and other adverts relating to endangered species) is restricted (although there are some exceptions).

But, aside from inserting a clause to this effect in their policy statements, what efforts do these and other internet sales sites make to ensure such clauses are adhered to. Do they rely on the general public to advertise the presence of such offending advertisements? That hardly counts as ‘corporate responsibility’ now does it? On the other hand, if they do fund some kind of oversight via their own staff, why then is the problem so pervasive – are they lacking staff, training or appropriate protocols? Again then, it is an issue of ‘corporate responsibility’.

These events beg the question as to whether companies such as Google and eBay take the issue of ‘corporate responsibility’ seriously. Is it simply a catchphrase to be used in their mission statements? Is it ethical to use the word ‘ethics’ in your company brochure if you actually pay it no heed?

Though criticisms of large companies such as Google and eBay for lapses in ethical oversight will always make the news, what about corporate responsibility in other small companies and not only for issues relating to illicit trade? Does your company completely vet all its suppliers and customers to ensure that they meet its own ethical standards? Have you given your staff training and instruction in corporate responsibility?

There is a corporate responsibility to ensure that ethical standards are applied in established markets and maintained when accessing new and emerging markets. This has to extend beyond hoping that new customers will read your policy guidelines and that current customers will adhere to them.

Is it acceptable that your business is hijacked for illicit purposes? Clearly not!

So, management and employees cannot afford to ignore these activities or the possibility that such activities can take place. This requires awareness, training and funding – none of which are sufficiently covered by simply placing a catchphrase in a mission statement. Perhaps the term ‘corporate responsibility’ is misleading; it suggests that it relates only to corporations. In fact, it is based on personal ethics – those of the managers, every staff member, the customers and the suppliers of any business (big or small). And while, here, I have focused on the issue of the ivory trade, there are countless other environmental (and social) issues where personal ethics are overlooked for commercial advantage.