Corporate Engagement In Climate Policy Not Where It Should Be 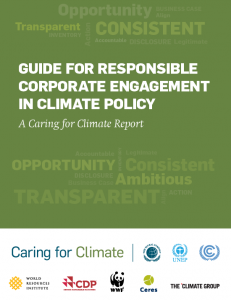 After interviewing more than 75 business and policy leaders from over 60 organisations worldwide, the UN Global Compact has published its Guide for Responsible Corporate Engagement in Climate Policy. The Guide issues a call to action, urging companies to exercise their power and influence to lobby proactively for a low carbon future.

Whilst some companies are already doing impressively on this, the record overall is mixed.

A survey of UN Global Compact companies found that only 30% had aligned their standard government relations activities with their corporate responsibility commitments. This lack of alignment has led to some reputational embarrassment for companies in the past, such as Conoco Philips which was revealed in 2012 to be asking employees to lobby against climate legislation despite its membership of the US Climate Action Partnership.

The Guide helps to join the dots between sustainability in public and lobbying in private by breaking down actions into three core areas: identifying direct and indirect areas of influence and potential opportunities; aligning words with actions to ensure consistency; and reporting of policy positions and lobbying progress.

By putting these action areas to use for constructive policy engagement, companies can not only steer us towards a stable, climate-conscious regulatory future, but can also gain stakeholder trust and protect shareholder value by preparing for the end of business-as-usual.

The Guide suggests that businesses ask themselves key questions, such as whether or not they are promoting policies consistent with current climate science, and whether they need to rethink pension investments in the light of such science.

It also suggests departing from traditional trade-bound approaches: instead of businesses joining umbrella organisations based on sectors or geographical locations, they might instead collaborate with organisations based on desired policy outcomes. This could lead to broad and powerful coalitions of businesses and civil society groups all acting in concert to bring about a low carbon future.

The US Climate Action Partnership, comprised at one point of 26 major companies and six environmental organisations, has shown the increased credibility of this approach.

The Compact hopes that the Guide will be a useful and effective tool for companies to use in the run up to Paris 2015 when a global climate agreement may be reached. UN Global Compact Executive Director George Kell says, “The time is ripe for enlightened business leaders to scale up corporate sustainability by engaging responsibly on climate policy, ultimately helping to drive energy efficiency, renewables and technology in a low carbon economy.”

The first of its kind, the Guide is a useful tool to spur on the political progress in this vital area.