They Shoot Giraffes, Don’t They? Why Copenhagen Zoo Euthanized Marius The Giraffe 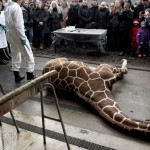 Last Sunday, February 9th, Copenhagen Zoo decided to euthanize one of their giraffes, Marius. The male giraffe calf was killed with a shot in the head, and fed to the carnivores in the zoo. It’s a dark, sad story, and it obviously caused a strong reaction in the public.

But what happened? Why did young Marius have to die? And did they really have to make a show out of it?

Well, let’s start from the beginning. Copenhagen Zoo belongs to the European Association of Zoos and Aquaria (EAZA), which regulates the best zoos in Europe. For a zoo to be accepted into EAZA, some strict guidelines need to be followed. One of the main points of keeping animals in zoos is to ensure the conservation of certain species through the activation of breeding programmes, aimed at maintaining healthy, viable populations. Since many zoos don’t have large enough populations to ensure viability, EAZA coordinates the individual animals and move them around for breeding purposes.

That’s a lot of scientific talk. Let’s make an example – let’s say we have a family of lions in a zoo in London, and a new female cub is born. When she reaches maturity, the young lady would have to be moved to another zoo, let’s say in Paris, so that she doesn’t breed with her own father – compromising the population’s health. In Paris she would find a new mate, and their cubs would be nice and healthy. But what happens when there is no other group available – that is, when the newborn is related to all other family groups in other zoos?

Well, that’s when problems start, and that’s what happened with Marius. His genes were too represented in the global captive giraffe population – he was basically related to everyone – and keeping him would eventually cause inbreeding. Giraffes cannot be castrated, or given contraceptives – that compromises their health and well-being, and it’s generally considered bad animal keeping. This is why Copenhagen Zoo decided to put Marius to sleep.

I am sure this hasn’t been an easy choice, especially since several other zoos offered to take care of Marius. This is the part that is making everybody angry. The point is that, as sad as it may be, the place that Marius would have taken in another zoo should be saved for a giraffe whose genes are required by the breeding programme. It sounds cold and scientific, but unfortunately, it seems like

this was the best way to proceed to ensure the best possible animal keeping.

Now, what about making the event public? Marius has been dissected in front of children and their parents – which could be considered slightly in bad taste. Or even a publicity stunt. A spokesperson of the zoo addressed the issue when interviewed by Time Magazine, and stated that the autopsy was made public for its educational value. It doesn’t really happen very often that children can learn about giraffe anatomy in such a practical way.

So, everything seems reasonable. Why is this story causing such an outrage? Even if I understand the reasons behind it I am very saddened by Marius’ fate, and I guess most of those who spoke against this decision felt the same. The problem is that we can’t always be cold-blooded scientists, and charismatic species – such as giraffes – are known to cause strong reactions in people. We admire them and can’t help but being attracted to them, and we feel sad when we hear this kind of stories. Maybe next time Copenhagen Zoo will remember this and will show a little more sensitivity about it.

Want to know more? Go to EAZA’s webpage to read about their breeding programmes, ethics and more; you can read more about Copenhagen Zoo at uk.zoo.dk.

Marius obviously had a right to live his full life. We don’t kill humans or pets because their genes may not be perfect and may not be the best for their species’ long-term survival, so why should we kill a giraffe who has as much right to live as anyone else? We’re the ones that caused Marius to end up in his situation in the first place and we humans are thus responsible for providing him with a good life.

Thank you for your comment and sorry if it took me so long to answer, hope you get to see this message. You make a valid point on how an individual life is worth protecting, which is something I actually completely agree – on a personal level. I believe, however, that scientists working on breeding programmes have to prioritise the species survival and well-being, and this includes making hard decisions like this one. I feel horrible about Marius’ death. But as I explained in my article, you can’t really prevent breeding in captive giraffes. Marius would have ended up breeding with a family member, compromising the species’ health. May I ask you how you would have acted?

One possibility that you didn’t mention is vasectomy. Another possibility might be to separate Marius from other giraffes in such a way that he could interact with them but just not breed, for example a fence that’s tall enough to prevent breeding, but short enough to allow interaction with giraffes on the other side of the fence.

If those solutions are not possible I still would have kept Marius alive because we humans caused him to be in his current location and situation in the first place, and we are thus morally obligated to care for him for his life span if we can’t release him into the wild. As I mentioned above, killing Marius to keep the captive giraffe gene pool healthy is a human construct which we don’t impose on humans and our companion animals. This is similar to how humans often designate certain species to be invasive species in a particular environment and yet never designate humans as an invasive species in a particular environment. These are human ideas that are deemed to be scientific, but are also very biased ideas. An alternative form of a scientific view would be to keep Marius alive and try some humane methods, such as I suggested above, to keep him from breeding in order to add to our knowledge base of captive giraffes. Only a few decades ago, the scientific method of housing zoo animals in captivity was to keep animals in cages or other very confined areas, and this “scientific view” has now been discredited – what we view as scientifically and morally correct today isn’t necessarily what we’ll view as scientifically and morally correct in the future.