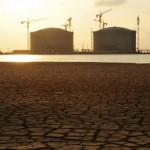 While current military flashpoints worldwide largely reflect racial and religious tensions, it is widely regarded that food, water and energy security will increasingly become the predominant drivers of military activity in the future. This is because climate change is likely to significantly alter the distribution of these vital resources and lead to climate wars.

Even with conservative estimates of temperature rises 50 years from now, the mosaic of agricultural production, water availability and renewable energy sources worldwide will differ from current patterns. Regions that once were self-sufficient in certain aspects of food production or water availability will perhaps have to become net importers of basic and fundamental resources, whereas previously resource-poor regions may find that they can now produce or access them.

This is likely to result in a kind of “resource envy”, which could engender inter-regional or international conflict – climate wars!. For example, the on-going race among nations to extend their territorial waters and the political manoeuvrings that are gathering momentum to stake claims in the Arctic Circle (in anticipation of climate change scenarios) are cases in point.

Similarly, numerous court cases are currently being fought between US states over access to water resources and political conflicts over water availability are beginning to appear in Asia and Africa. Wars have been started over less critical issues and even some recent conflicts could be attributable, at least in part, to energy issues though they may have been initiated under the guise of social responsibility.

However, despite that most governments now accept climate change as a very real threat, expenditure on prevention or mitigation strategies remains minimal. In contrast, defence continues to be one of the largest departments of government expenditure and, bizarrely, seems to be largely immune to the current global economic crisis. For example, in 2012, UK government spending on military defence was GBP£33.7 billion compared to just £4.9 billion on environmental issues. The US federal military defence budget in 2012 was US$677.9 billion, whereas for environmental issues it was only $19.4 billion. Of course, in this era of terrorist threats, there is a strong argument for investing in national security. However, spending on anti-terrorist activities is generally only a minor component of most national defence budgets.

Using the perceived logic behind defence spending that military strength dissuades aggressive acts and thus is funding for a possible (future and not yet real) threat, then the very real threat of climate change and associated potential conflict warrants some strategic re-assessment of current defence expenditure. Instead of channelling such huge funds into military arsenals that, in most cases, become obsolete before they can ever be used, why not assign part of the vast global military budget to climate war mitigation or prevention projects to minimise future conflict over basic resources?

Although it is almost impossible to budget for climate change, it has been estimated that approximately US$700 billion/year would need to be spent from now to prevent a further rise in global temperatures this century. Global military spending is on average $1,750 billion/year (admittedly, 40% of which is attributable to the US alone).

While there does seem to be general political consensus that something should be done to limit climate change, what appears to be lacking is foresight into how it should be done and, critically, where the money will come from to do it. Since, for economic reasons, new money cannot simply be created to pay for this threat, then clearly the funds to mitigate climate change have to come from within current government budgets. Obviously, siphoning funds from the areas of pensions, welfare, health and education (the other most significant expenditure items for most governments) is unacceptable. Thus, defence budgets are the most likely sources of the necessary revenue for environmental action.

It is perhaps coincidental that those countries with the largest military budgets are also considered amongst those as the most polluting. By funding environmental projects in this way, the argument of developing countries that their economic development should not be impeded by having to pay for climate change mitigation is less robust.

Similarly, developed nations cannot justify huge expenditure on certain perceived military threats, if they do not also take account of the very real threat of climate change and climate wars!

The current “arms race” is self-perpetuating and, in many cases, military strength has more to do with national prestige than having a deterrent effect. Ministers of defence have perfected the art of securing disproportionate funding for perceived threats that may or may not arise; ministers of the environment now need to argue their case for some of that funding for the indubitable fact of climate change.