Climate Paradox: Do We Need To Phase Out Coal? 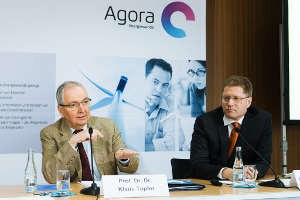 While we are in the midst of a steadily progressing Energiewende in Germany, world climate scientists from the renowned climate science body IPCC (Intergovernmental Panel on Climate Change) are releasing their newest findings these days in Berlin. The results presented in Yokohama some weeks ago showed the world that human induced climate change is not only real and happening, but impacts are and evermore will be worse than expected. On Sunday 14 April, the scientists present possible mitigation pathways to decision-makers and the public. Ottmar Edenhofer, chair of working group III said in his welcome address on 7 April: “We often used the image of the mapmaker and navigator: the scientist explores different paths to certain goals and characterizes these paths in a map; but it is the policymaker who makes the decision on which path to follow.”

Time to look at the facts

Carel Mohn, Communications Director of the European Climate Foundation, Berlin opens the press conference presenting the analysis “The German Energiewende and its Climate Paradox” organized by Agora Energiewende and his organization on 11 April 2014 in Berlin stating that time has come to “look at the facts, because the facts look at us”, quoting no less than Winston Churchill.

Klaus Töpfer, Executive Director of the Institute for Advanced Sustainability Studies (IASS), Chairman of the Council of Agora Energiewende holds the view that Germany is unique in the world with respect to its combination of ambitious climate policy with emission reduction targets of 80-95% until 2050 and its decision on phasing out nuclear energy until 2022. Still: emissions have been rising for the last three years. That’s what Agora Energiewende calls the “Energy Transition Paradox”.

Is the German Energiewende in trouble? Evidence suggests that something must be going wrong: While the share of renewable energy continues to grow in the electricity mix (2% on average over the last years), greenhouse gas emissions are rising. Whose fault is it? Is it due to the phase-out of nuclear energy until 2022? By no means. Renewables overcompensate the decreasing nuclear energy generation. Germany today is a net exporter of energy, exporting to neighbouring countries when demand is high and importing when demand is low. Its neighbours are dependent on inflexible base load power plants and profit from the higher volatility in the German energy system. Patrick Graichen, Director of Agora Energiewende emphasizes that the neighbours have high interest in exchange on the Energiewende, especially countries such as the Netherlands and Austria which import significant energy amounts from Germany. 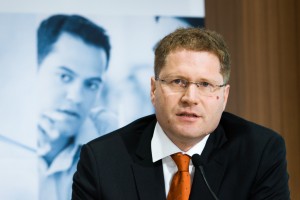 According to Graichen, there are two reasons for the recently observed emissions upwards trend. First, coal started to replace natural gas, causing higher emissions per unit of energy. Low carbon prices caused by the failed EU emissions trading system lead to comparably lower coal prices, while gas prices depending on the oil price remain high. Secondly, the Energiewende predominantly focusses on the electricity sector, neglecting both heating/cooling and transport sector. Emissions in these sectors stayed on the same level, although they need to decrease sharply. Töpfer says that Germany needs to do considerably more to reduce emissions in these sectors, mentioning efficiency as a key issue. There is broad agreement on a renewable energy target of more than 80% in 2050. But “there is no consensus in the question what we will have to do with coal and gas”, says Patrick Graichen. And Klaus Töpfer adds: “We need consensus on coal. We might have to ask the question how we will deal with carbon dioxide in the future.” As there is no much hope to be seen for revitalizing the EU-ETS, we should think about how best to combine government regulations with our market economy. “Markets do not fall from heaven like manna does,” concludes Töpfer. “Markets develop in combination with regulations, prices affect the market economy and price elasticity matters.”

The tasks ahead for Germany: creating a coal consensus, working on ambitious climate policy, pushing for worldwide climate action and developing clean energy technologies that the developing world can easily adopt.