The Climate Of Middle Earth 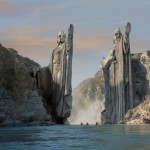 As The Big Bang Theory made clear, scientists love The Lord of the Rings. Hell, I read the book eleven times myself. So you can imagine my delight in discovering that a scientist who calls himself Radagast the Brown just published a paper called “The Climate of Middle Earth”, on how he used real climate models to describe the different climates one would find moving from the Shire to Mordor. In English, Elvish and Dwarfish.

How cool is that?

Well, first the bad news – unfortunately the non-English versions of the paper simply use Elvish and Dwarfish fonts, and they’re not actually written in the two languages. Bummer. But I assume Dr. Brown is a busy man and didn’t have the time to actually translate his paper – he works two research jobs, one in Mirkwood, Middle Earth and one at the Cabot Institute, University of Bristol.

In his paper Dr. Brown argues that the fundamental science behind climate models can be used in many situations – for instance, to describe future scenarios or past situations (think Ice Ages) – and can therefore be easily adapted to Middle Earth by inserting the appropriate geographic features. He uses a model that is also used in the Intergovernmental Panel on Climate Change (IPCC) report, but he mentions that the model can describe regional climate – the Shire, or Mordor – but can’t really make accurate predictions for specific sites – Isengard, or Bree.

The specific parameters for Middle Earth (topography, bathymetry) have been obtained by research in Rivendell. Results show how the Shire’s climate is close to England’s, while Mordor has a dry climate similar to Texas’; mountainous areas like the Misty Mountains are colder, and the Eastern part of the continent has a rigid continental climate with cold winters and hot summers. Winds blow from west towards the east in the Southern coastal regions, but in the opposite direction in the North-East – which is probably how the Elves managed to sail to the Undying Lands.

While the results are hardly ground-breaking – Mr. Tolkien already did a fantastic job in describing the geography and climate of Middle Earth – Dr. Brown (who uses the name Dan Lunt while working at Cabot Institute) has the merit of making climate change a bit more interesting to the general public. Climate change science is a tough subject, with lots complicated maths. I can’t blame people who skip climate-related news because they’re often terribly dull. This little paper brings the focus on the work of the IPCC and the importance of climate models, while making it a little sexier for the casual reader.