Will Climate Change See The End Of The Winter Olympics? 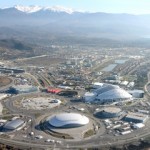 Two months before the 22nd Winter Olympics commenced in Sochi in Russia, dozens of shamans from the Altai Republic were procured by the Olympic organising committee to perform a ceremony to ensure an adequate supply of snow.

In case prayer didn’t work, there were 550 artificial snow machines that added bacteria that enables water to freeze at a lower temperature to water drawn from two man-made lakes. And then there were 25.85 million cubic feet of snow in refrigerated reservoirs. During the opening ceremony, it appeared that prayer had been answered, but there was no snow since. Temperatures were never less than 40°F and were 60°F on six days. Never was the temperature below freezing. Some people were seen sunbathing.

Sochi should surpass Vancouver in 2010, when snow had to be helicoptered in, and make for the warmest Winter Olympics ever. By the middle of this century, former Olympic venues such as Oslo in Norway, Chamonix in France and Sochi will be too warm to host the Winter Olympics.

Daniel Scott, an associate professor of Global Change and Tourism at Canada’s University of Waterloo, has studied the interaction of recreation and the environment for decades. He made clear that weather management techniques were reaching their limits.

He led a team that utilised data supplied by the Intergovernmental Panel on Climate Change and the World Meteorological Organisation in addition to national weather agencies. The team found that while all 19 past host cities are currently considered climate-reliable, that number will be reduced by half by the middle of this century and could be as few as six by the end of the century: Albertville in France, Calgary in Canada, Cortina d’Ampezzo in Italy, St Moritz in Switzerland, Salt Lake City in Utah and Sapporo in Japan.

Robert Steiger, a geographer for Management Centre Innsbruck, bemoaned the difficulty of finding a city to host the Winter Olympics. Innsbruck played host in 1964 and 1976, but could no longer deal with all the people who attend what is now a mega event and require infrastructure and means of travel. Hence the games can’t be set in some far-flung location that still has snow, ruling out Greenland for one.

Athletes are now starting to be concerned for the future of their sports. 105 Olympians partnered with the pressure group, Protect Our Winters, to release a statement calling on governments to “Recognize climate change by reducing emissions, embracing clean energy and preparing a commitment to a global agreement at the UN Framework Convention on Climate Change in Paris 2015.” In April 2013, 75 Olympic medal-winners in snowboarding and skiing wrote to President Obama, imploring him to take firmer action against climate change, summarising their case as “Without a doubt, winter is in trouble.”

Kyle Tress, a US skeleton racer, regards climate change as a threat to the very existence of his chosen sport. He fears that rising temperatures will increase the cost of building and maintaining venues to the extent that sliding sports will be removed from the Olympic programme. Worse still, as Management Centre Innsbruck’s Robert Steiger pointed out, if people 50 years hence are unused to snow, winter games may not even be interesting.