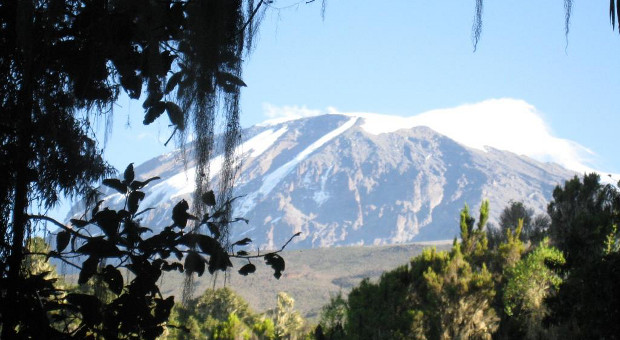 At nearly four miles high, Mount Kilimanjaro is the highest mountain in Africa. A study by the British think tank, the Overseas Development Institute, found that it is visited by between 35,000 and 40,000 tourists every year, making it one of the leading attractions in Tanzania. These visitors spend around USD50/GBP30/EUR37 million annually in one of the world’s poorest countries, of which 28 percent goes to locals – the most successful transfer of resources from international tourists to poor people anywhere in the world. The eye-catching glaciers are a principal lure. These are at least 11,700 years old, and over a million people in local villages depend upon them. They are, however, now under threat from climate change on Mount Kilimanjaro.

Disappearing ice on Mount Kilimanjaro is nothing new

When Mount Kilimanjaro was first observed by Europeans more than 150 years ago, its cone lay beneath a thick crust of ice, however 85 percent of this has vanished since 1912, although this began before global warming. In fact, Hans Meyer, the first man to climb the mountain, was horrified to find that glaciers had retreated by almost 330 feet when he returned nine years later in 1898.

… but now, it’s getting worse

Glacier shrinkage on Kilimanjaro is nothing new, but now, it’s faster than ever: around one percent a year from 1912 to 1953 but 2.5 percent a year from 1989 to 2007, when climate change was in full swing. The Snows of Mount Kilimanjaro is the title of a 1936 short story penned by Ernest Hemingway that was made into a film in 1952. In his 2006 film, An Inconvenient Truth, Al Gore claimed that these snows were disappearing due to climate change on Mount Kilimanjaro.

In 2009, the most recent study of the mountain warned that climate change could cause Kilimanjaro’s snows to disappear within 20 years. In the course of the seven years of the study, data as old as almost a century was employed, six tons of equipment was carted to the mountain’s plateau and deep drilling took place. It was found that ice between six and 17 feet thick had vanished since 2000. Almost a quarter of the ice was lost from 2000 to 2006: no factor other than climate change on Mount Kilimanjaro can account for this sudden change. Deforestation affects only lower areas, and the glaciers are high above.

Kilimanjaro’s glaciers are evaporating rather than melting, which permits us to incorporate the funky word, evapotranspiration, in conversation. Greater dryness could well be the principal driver of glacier shrinkage. East Africa has been receiving ever less moisture, causing drought and famine in Ethiopia, Kenya and Sudan. As a result, Kilimanjaro’s snows are not being replaced. Naysayers claim that it’s lack of precipitation rather than higher air temperatures that are responsible, but isn’t that itself a result of climate change? It would take but a few seasons of new snow to overcome the effects of climate change on Mount Kilimanjaro and replace the ice, a phenomenon that has recently allegedly been observed, although the park service doesn’t monitor the situation.

And it isn’t just Kilimanjaro

The snows of Kilimanjaro survived a 300-year drought about 4,200 years back, but human behaviour clearly threatens them now. Similar effects have been observed elsewhere in Africa, for instance on the Rwenzori Mountains and Mount Kenya, the Andes in South America and the Himalayas. The lead author of the 2009 study, Lonnie G. Thompson, a glaciologist at Ohio State University, enunciated that the same thing coming to pass on different continents suggested a common cause.

One of Kilimanjaro’s glaciers, the Furtwängler Glacier, became half as thick from 2000 to 2009, and Thompson fretted that it will be there one year and gone the next. This shows what the whole world has in store, unless it changes its ways.

Want to climb Kilimanjaro and see the glaciers for yourself, check out tour options here.

Hi, I would like to cite this in my EPQ. I am a college student in Leeds, UK. Please may you tell me the date of publishing i can’t seem to find it.
Thank you.