Effect Of Climate Change On Biodiversity: New Studies On Penguins And Butterflies 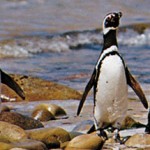 It’s a generally accepted fact that climate change is having harmful effects on biodiversity worldwide. You might have heard, for instance, stories about species moving north as countries in lower latitudes get warmer.

The gravity of these phenomena is often downplayed by climate change sceptics, perhaps because they only seem indirectly connected to climate.

Magellan penguins are adapted to live in a desert environment, the Antarctic Peninsula and Southern Argentina. They build nests on the ground, in crevasses or burrows that provide some protection against the weather. The largest colony is found in a place called Punta Tombo, a site where rainfall and the frequency of extreme storms dramatically increased in past few decades – this resulted in generally wetter conditions that are making the penguins’ life pretty hard. And things are not going to be any better: the latest climate models predict a further increase in both precipitation and storm frequency.

So, how does this damages the poor penguins? In a lot of ways. To find it out, researchers had the unfortunate duty of having to go from nest to nest to check chicks and see which ones were starving, which ones were wet from the rain, and which ones died – and how. A bit of statistics followed, and they discovered that, while predation and starvation are still the main cause of death, the importance of adverse weather in chick survival increased in the past few years. Violent storms can severely compromise colonies, as large numbers of birds are often killed – reports suggest that up to 50% of chicks might be lost in a storm. Once chicks get their down wet they get cold, and their survival odds sharply drop.

More birds may die because of extremely high or low temperatures, or scarcity of water following droughts. Additional stress is caused by competition and predation, which increase after prey populations move away after changes in climate. This often causes reduced parental efforts – adults are too worried to fend for themselves to take care of their chicks. It looks like it’s tough to be a penguin.

What about butterflies? Their sensitivity to climate change is well-documented, and they are known to be among the species that respond to change the fastest. A new study, carried out in a protected area in Greece, aimed at researching how butterfly communities changed over a long period of time – data was collected as early as 1998. The results confirm that as the temperature increased species adapted to colder weather – well, relatively colder weather, it is Greece we’re talking about – moved away and the warm-loving ones became more common. Now, the researchers recognise this could have been caused by a number of reasons, but since the study site is a protected area, where most factors are stable and under control, they feel pretty confident saying that climate change is the culprit here.

And they rise a very interesting point: how long until our protected area network is rendered useless by species displacement? If wildlife keep moving north, as current trends suggest, the protected area network will need to be redesigned to make sure that displaced species are provided with enough habitat. Which, if you ask me, doesn’t really seem like an easy thing to do, and we should focus on fixing things up now, before it’s too late to fix them.

Want to read more? Here is the original paper on Magellan penguins, by Boersma and Rebstock, and here is the one on butterflies, by Zografou et al.