Climate Change In Africa – Are We Fighting A Losing Battle? 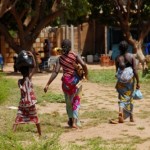 It is over a month since the final draft of the Intergovernmental Panel on Climate Change (IPCC) Fifth Assessment Report “Climate Change 2013: The Physical Science Basis” was published. Although the report will undergo some reviews before its final official release, a glance through the report reveals that we are approaching dangerous climate change levels and exceeding planetary boundaries. Current atmospheric CO2 levels are over 390.5 parts per million by volume (ppm). This CO2 concentration is 40% higher than what existed in 1750 (preindustrial levels). Moreover, acquired data on global combined land and surface temperature reveals an increase of about 0.89oC between 1901 and 2012.

The findings show that we have exceeded by 12% the 350 ppm threshold. We are on route to environmental catastrophe.

What does this mean for Climate Change in Africa?

Africa has contributed very little to anthropogenic-induced climate change but there are strong indications that the continent will be most impacted by climatic change.

Already, the intensity of extreme events such as droughts and floods is on the increase on the continent. The resultant impacts of these extreme events continues to increase the number of displaced people on the continent, affect food and portable water supplies, accelerate biodiversity extinction rate and also create a conducive environment for bio-invasion.

Extreme events aggravated by high poverty levels will no doubt lower the resilience of the continent to better adapt to climate change.

So, what are the next mitigation moves for Climate Change in Africa?

However, the challenge for the continent is an economic and political one. Can the continent afford to invest in these advanced technologies whilst trying to cope with unrelenting poverty and public health issues, wide scale corruption and failing public infrastructure?

What of adaptation to Climate Change in Africa?

Yet again the constraints are economic and that of political will.

Have you thought about management of the effect on a lower scale?

If we aren’t doing much to prevent possible events, we should sure be ready to manage them. Are there smaller resilience structures that could be exploited?

Thanks Ayo for your comment. Subsequent articles will address that.