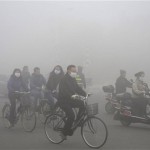 The Chinese city of Harbin, which has a population of 11 million, was virtually closed by smog for two days starting on Monday, October 21. More than 2,000 schools suspended classes and some public bus routes and the airport were closed, with the cancellation of 258 flights. Visibility was as little as 33 feet. Children, elderly people and those who are ill were urged to remain indoors. Several car accidents occurred due to poor visibility. One resident interviewed by CNN divulged that face masks were sold out.

The PM2.5 index which measures particles of 2.5 microns or less and are so particularly dangerous, exceeded 1,000 in some areas of the city. More than 300 is regarded as hazardous while the World Health Organisation recommends daily exposure to no more than 20.

The Xinhua governmental news agency attributed the environmental emergency to heating systems being turned on for winter. Temperatures can be as low as -40ºF, and in 2010, Harbin spent $1.1 million to add five new layers of insulation to 21 million square feet of residential buildings and improve windows and roofs. Officials also blamed the burning of crop stubble by farmers after the autumn harvest in conditions of low winds. Harbin’s chief meteorologist, Fang Lijuan, stressed that such extreme conditions were very rare, and that the lack of strong wind and high humidity were responsible on this occasion.

The Chinese government is extremely disconcerted by bad air quality as it fuels popular resentment. Chen Jiping, formerly the leading member of the Communist Party’s Committee of Political and Legistlative Affairs, attested that pollution is the leading cause of social unrest in the country.

Air pollution exacerbates people’s objections to political privilege and rising inequality in the second-largest economy in the world. Domestic media have run stories telling of the costly air purifiers government officials have installed in their homes and offices and the special organic farms they use to avoid China’s plague of food safety scandals.

Users of Sina Weibo, the Chinese equivalent of Twitter, were up in arms at the situation in Harbin. One user, MaltzZz, posted that everybody was late for class because they couldn’t find the academic building. Another user, Xiao, described Harbin as “today’s dead city,” adding, “Beijing, you’re no longer alone. You have us too now.” Jilin posted that his mother had called to ask how the air was and if he was coughing, to which he responded that he felt OK and “should be able to live to see my graduation.”

The government has made strenuous efforts over the years to combat pollution, but little effect has been evident to date. The latest measure is to list the top ten most air-polluted cities in the hope that national humiliation will spur action.

Similar problems were evident elsewhere in northeastern China, including Tangshan, two hours east of Beijing, and Changchun, the capital of Jilin province. Beijing experienced a smog emergency of its own in January when the PM2.5 index surpassed 900 one day.

Research that appeared in the Proceedings of the National Academy of Sciences showed that air pollution had reduced life expectancy in China by over 2.5 billion years. The government provided free coal to homes and offices in the north of the country from 1950 to 1980, making life expectancy 5.5 years shorter than in the south in the 1990s. This disparity remains on account of heart and lung disease that results from the burning of coal.

Bill Chameides of Duke University’s Nicholas School for the Environment headed two studies of air quality in China’s Yangtze Delta between 1995 and 2004. This latest episode caused him to reminisce of how the environment then was “really bad,” with the sky covered by a “smoggy, foggy, grey blanket. He recounted that a taxi driver once told him that while dogs howl once a month when the moon is out, in China they howl once a month during the day, as this is the only time that the sun comes out.

Living standards in China are rising, leading to ever more demand for power, and coal is subsidised, so consumers don’t truly appreciate the cost of heating. New coal plants have been banned in the industrial regions near Beijing, Shanghai and Guangzhou because of their effect on air quality. The government has approved at least nine large-scale projects to transform coal into synthetic natural gas (SNG). Chi-Jen Yang, a researcher for Duke University who co-authored a recent paper on the subject of SNG, stated that this can “help quite a bit,” but it produces greenhouse gas emissions sevenfold as great as conventional natural gas and requires ungodly quantities of water.

Duke University’s Bill Chameides pointed out that “China’s pollution is a threat to us all.”