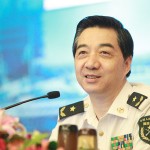 Rear Admiral Zhang Zhaozhong, a military expert for China’s National Defence University, has claimed that the smog that blankets the country amounts to laser defence. He divulged on the state-owned CCTV television channel’s Haixa Liangan (Cross Straits) programme, “Laser weapons are most afraid of smog.” Where there’s no smog, he explained, a laser weapon has a range of six miles, but where smog is present, this goes down to 0.6 miles. The reason is that smog is comprised of minuscule metallic particles that deflect laser light. Rear Admiral Zhang enquired, “What’s the point of making this kind of weapon?”

When a furore erupted that saw more than 10,000 comments and re-posts to the Twitter-like Sina Weibo social media website, the Rear Admiral protested that his comments had been taken out of context, and he was speaking of the weakness of laser weapons rather than the benefits of smog, that potent laser defence. He invited people to watch the entire 12-minute interview because distilling it to a few soundbites in a two-minute clip had led to “misunderstanding.”

In the interview, Rear Admiral Zhang also mentioned that a ship-mounted laser faced the problem of salt water which could damage it, for instance by rust. He snivelled that his remarks were “totally accurate, 100 percent without error.” Evidently, people in China should rejoice smog blocks sunlight.

It has previously been suggested in the Chinese media that pollution has an upside: the jingoistic newspaper, the Global Times, alleged that it could thwart missile attacks and make enemy surveillance more difficult. One netizen responded that this particular form of laser defence was killing people in China, obviating any need for enemies to possess weapons: according to Greenpeace and the Peking University School of Public Health, 8,572 people in Beijing, Guangzhou, Shanghai and Xi’an died prematurely from exposure to airborne particles in 2012.

The state-run Xinhua news agency published an article with the title of Five Surprising Gains from the Smog, listing them as uniting people, equality (except that the rich can afford air filters), a sense of learning because the phenomenon taught people about meteorology and chemistry and the facts that it made folk more humorous and reminded them of the price of China’s economic progress. And now there’s laser defence, too.

When smog becomes too great, the government recommends that construction sites cease building, major industrial plants suspend or reduce production, schools and kindergartens cancel outdoor activities and the common public stays indoors, donning facemasks if they must venture forth. Barbecues have been banned and seized.

Laser weapons are happening. Two years ahead of schedule, the US Navy plans to mount one upon the USS Ponce, a transport vessel weighing close to 17,000 tonnes that will be stationed in the Middle East. The weapon can be used against drones and smaller boats but not against aeroplanes or missiles, although it’s hoped that that day will come.