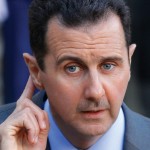 The civil war in Syria has killed over 100,000 people. The US President, Barack Obama, perhaps unwisely, declared the use of chemical weapons by Syria’s embattled government to be a “red line” which was crossed when an attack near Damascus on August 21 killed hundreds of people. President Vladimir Putin of Russia offered to arrange a deal whereby Syria’s President Bashar al-Assad would surrender all his chemical weapons. Some experts consider their disposal to not be possible.

Security expert, Yochi Dreazen, believes that disposal “would be nearly impossible to actually carry out.” Cheryl Rofer was prior to her retirement a chemist employed at the Los Alamos National Laboratory who helped the US Army to rid itself of chemical weapons early in the 1990s and is now a writer and blogger. She holds that disposal would be possible, as it was in Iraq at the same time and is in the process of happening in Libya now. In Libya, said she, the revolution interrupted the process, “but basically it was working fairly well.”

Per Rofer, a ceasefire is required because chemical weapon disposal is difficult “while people are shooting at each other.” It’s not clear whether rebels would comply. Then, Assad would need to declare all the chemical weapons and components thereof that his regime possesses – only his government knows the location of all dangerous materials, although facilities are known to exist in Hama, Homs and al-Safira and sites are suspected in Latakia and Palmyra.

Foreign troops should secure locations containing chemical weapons, of which there are likely to be tens of thousands. Munitions would need to be handled by specialists, and the United States, Russia and the United Kingdom all employ these. Weapons, which might be leaking, would be transferred to centralised locations where the most probable method of disposal is incineration. If local facilities are unavailable, there exist some in Russia, although these are operating at full capacity disposing of Russia’s chemical arms and there is the issue of transporting the weapons through foreign waters. An alternative would be to use US mobile units, although these have never been tested in a war zone. In this case, chemical weapons are either placed in an armour-plated chamber known as a “bang box” where they are destroyed by an explosion or chemicals are used to neutralise agents.

Mike Kuhlman, a scientist who works for Batelle, a security contractor based in Columbus, Ohio, remarked that the destruction of chemical weapons wasn’t “simply burning the leaves in your backyard.” The US program to destroy its chemical munitions is slated to cost USD35/GBP22/EUR25bn and not be complete before 2023, despite Congress initiating it almost 30 years back. Al-Assad stated that disposal would cost around USD1bn/GBP619 million/EUR729 million and take around a year. The equipment used to make chemical weapons will be destroyed by 1 November by such low tech means as filling it with concrete or smashing it.

Until the 1980s, chemical weapons were often dumped at sea or buried, but this is now forbidden by the Chemical Weapons Convention. Now, the dirty work of dismantling them is often conducted by robots. The Pentagon admitted that explosions have been known to occur, which can delay the process by months to allow for clean-up. Objects that have contained chemical weapons are scrubbed. The resultant brine is evaporated and salts and scrap metal are packed into drums and buried. Sarin can be mixed with hot water containing liquid sodium hydroxide. Mustard gas can be mixed with alkaline water. Neutralisation is more palatable to the public than incineration.

Inspectors from the Organisation for the Prohibition of Chemical Weapons, based in the Hague, have reached 11 of the 20 known chemical weapon sites in Syria and begun to destroy materials at six. It appears that al-Assad’s regime is cooperating, which doom-mongers claimed would not come to pass.