Causora, the one-to-one giving platform, partners with the SBt 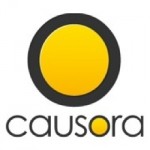 We are proud to announce that we have recently partnered with Causora, a one-for-one giving platform, backed by Google and Univision execs, that rewards donations. The innovative Causora donation model works as follows.

Causora have partnered with a number of causes and charities. The public can donate to these causes through Causora and receive rewards for the same amount in return. Rewards can then be redeemed through Causora’s network of socially conscious merchants (like Zipcar, Novica and Milk & Honey).

Causes can fundraise money. People can donate and receive equal value rewards in return. And merchants can support charitable causes and in return engage with consumers on a much deeper level.

Where does the Sustainable Business Toolkit come in?

Well we, along with a large network of web properties, provide the crowd funding extension by hosting Causora’s fundraising form (see the side-bar adjacent).

In return we get to promote a cause of our choosing and receive a small commission on each donation (3.5%) for hosting and setup.

We have decided to support the Red Cross campaign rasing money for victims of Typhoon Haiyan. Why?

1. Our founder is currently living in Vietnam (which was also hit by the Typhoon) and has seen some of the devastation it caused in central Vietnam. Lives have been lost, homes and livelihoods destroyed and people’s lives turned to ruin and despair

2. The increase in the frequency and intensity of extreme weather events like Typhoon Haiyan, provide further evidence of the impact climate change is having on the world. Our platform stands for action on climate change and as such it makes perfect sense for us to support this worthy cause that has devastated large parts of the Philippines

How can you get involved?

If you are feeling charitable but would also like to receive a reward for the same value of your donation, click on one of the donation values adjacent. You will be ask for your billing details and will then be able to select a reward from the 150+ merchants that have partnered with Causora

There is something for everyone!