Without Change, Carbon Dioxide Capture By Plants Will End 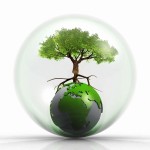 Carbon dioxide is as essential to plants as oxygen is to humans: they break it down by photosynthesis to create glucose. Aggregations of plants such as forests and meadows are therefore known as carbon sinks as they transport CO2 from the atmosphere to the soil. This carbon dioxide capture could, however, be brought to a close.

Seven computer simulations amounting to “extensive modelling” that were run on supercomputers by scientists in Japan and Europe have demonstrated that those plants that aren’t bulldozed, burned, poisoned or killed by pests will initially grow more and will keep up with their carbon dioxide capture for a while, but rising temperatures could terminate this. Climate change would then accelerate, leading to more droughts, forest fires and species extinction. The research was published in Proceedings of the National Academy of Sciences.

The reason is that heat dries out plants’ reserves of water, placing such stress on them that they release more CO2 than they absorb. By way of example, the lead researcher, Dr Andrew Friend of Cambridge University, told of the heat wave in Europe in 2003 when temperatures were 43°F (6°C) higher than usual, killing tens of thousands of people and causing the production of so much CO2 – 10 percent was added to the world’s carbon dioxide emissions – that the effects of four years of attempts at carbon dioxide capture were outweighed. Plants also grew more slowly and crop yields were 20 percent lower.

It’s believed that plants will reach their tipping point when the world is around 39°F (4°C) warmer than it was in pre-industrial times, which is set to occur by the end of the century. So far, the Earth has warmed by less than 34°F (1°C) and while governments plan to restrict the increase to twice this, current practices would bring vegetation to the brink. Unless behaviour changes, heatwaves as intense as in 2003 could occur every two years by the middle of this century, and by the end of the century, 2003 would be seen as a cool year.

The researchers called for “a change in research priorities” that concentrated more on carbon residence times – the time carbon remains within plant life – which is presently little-understood. They hope that policymakers will note the effect of permitting emissions to exceed a certain level.