Canadians strike back against bike thieves 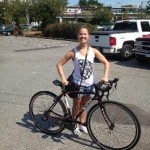 Canada is home to the man labelled the world’s most prolific bicycle thief. In 2008, 2,865 stolen bikes were recovered from the Bicycle Clinic, a shop in Toronto that was owned by Igor Kenk. Ruth White, who heads the arresting police unit, 14 Division, swore that she hadn’t seen such a thing in 30 years.

The shop was crammed full to such an extent that the fire service was obliged to remove windows from the upper floor and lower bicycles by rope. Another 200 were seized at the miscreant’s home in an upmarket area of Toronto, along with 15.5 pounds of marijuana, cocaine and a stolen bronze sculpture. Garages rented from 10 landlords contained yet more. Kenk paid others to steal for him with money and cocaine. It was believed that he was using his ill-gotten gains to play the commodities markets. His love partner was also charged.

Following Kenk’s arrest, 15,000 Torontonians visited the garage of a police station where the swag was stored, hoping to be reunited with their two-wheeled conveyances, and almost 900 got lucky. Kenk and an accomplice were apprehended after a surge in bicycle thefts prompted police to plant bicycles on streets and stake them out. He was sentenced to 30 months’ imprisonment – one day for each three bikes he purloined. While he languished in a cell, bike thefts decreased by 17 percent.

There was some irony in that Kenk, 50 years old, had been a policeman in Slovenia. He also claimed to have been a KGB agent. Alex Jansen, a filmmaker who laboured on a documentary about Kenk for over a year, described him as “easily the most hated man in Toronto.”

Canadians, however, have struck back. Quentin Matheson’s 13 year-old Raleigh hybrid bicycle was stolen in August, 2013. Three days later, a friend of his saw it in the street. The friend recognised it because he owned a bicycle shop and had serviced this bike three times, and was blessed with the tools required to break the lock.

The man recovered his bicycle and replaced it with a piece of cardboard adorned with a drawing of a bike. A note was left that began, “‘You rascal! You took my bike earlier this week but forgot to tell me where you’d leave it!” It concluded, “Anyway, I kinda need my bike so I’m taking it back. Please accept this substitute until you can afford your own.” A picture of the cardboard cutout was uploaded to Reddit by the friend, who posted as Festethejeste, whereupon it went viral.

Bicycle theft is a major problem in Toronto, one of the most bike-friendly cities in the world, with eight stolen every day, a rise of more than 50 percent in five years. Thieves often leave stolen bikes on the street, locked, so they don’t get caught with them in their possession. The technique was beloved of Igor Kenk, and on this occasion there were other bikes on the street with the same type of lock.

That same month, the bicycle of Kayla Smith of Vancouver was also stolen. It had cost her USD953/GBP610/EUR723, which, as a bartender, meant that she had “slinged a lot of beer for this.” A day later, a friend saw the bike for sale on Craigslist for less than a third of this price. Smith called the police, to be told that action might not be possible the same day. She recounted that she thought, “THIS GUY IS SELLING MY BIKE RIGHT NOW!!!”

The vile criminal had given an address two blocks from where the bicycle had been stolen. Smith phoned him and arranged to meet him in the parking lot of a branch of McDonalds in half an hour. The bike was surely hers, as stickers and special brakes were present, and she said to herself, “Holy crap, this is my bike.” To Facebook, Smith posted, “I just play sweetly dumb.” The seller informed her that he’d purchased the bike from his roommate, and Smith kept to herself the thought, “Hum, no you didn’t. You stole it from me last night, you liar.”

Smith asked to try out the bicycle in the parking lot. “Yeah, just don’t ride away,” was the reply. Smith assured the thief that she wouldn’t, and then, heart pounding, did just that. A comment to the website of the Canadian Broadcast Corporation read, “Was it smart? Probably not. Was it badass as all Hell? Damn straight!”

Smith later phoned the pilferer and left a message, apologising. She noticed that he was selling a selection of bikes and iPhones, and passed the details on to Crimestoppers, in addition to telling them of her earlier deed. She and the woman who took the call shared a great laugh.

If you wish to ever see your bike again after it’s stolen, it helps if you record its serial number, which can be entered to a police database in the case of Vancouver.