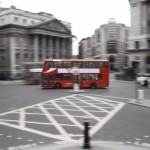 This dramatic decline in bus journeys is not isolated to one region but a sign of a national malaise with London and the South of England being the only regions to buck the trend.

The Annual Bus Statistics report from the Department of Transport (DfT) corroborates the change in bus passenger travel across the Great Britain. 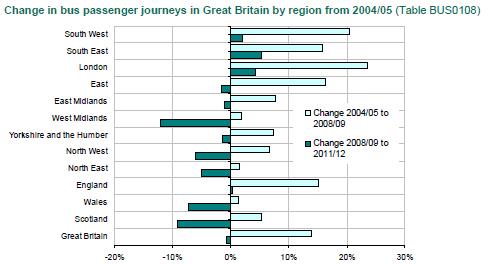 So what is causing the decline and what are the UK trying to do about it?

In London the picture is more encouraging. London has seen an increase in bus passenger numbers year on year. In 2011/2012 there was an increase of passenger numbers from 2.32 billion to 2.4 billion. This increase is not totally representative of bus travel across the capital because of the higher portion of users in Inner London. In Outer London the car is still the preferred mode of transport.

How do we increase passenger numbers and decarbonise our public transport system?

Interestingly, the DfT has a number of initiatives in progress. Reform of the Bus Service Operators Grant (BSOG) a subsidy paid to bus operators in England is a key policy change being considered by the Government. The original aim of the BSOG was to “benefit passengers by helping bus operators keep their fares down and enabling operators to run marginal services that might not otherwise be profitable.”

In 2011/12, around £450 million was paid to bus operators in England through the BSOG. However, a recent DfT review revealed the current BSOG is linked to fuel consumption. This suggests the BSOG is poorly targeted and not aligned to the UK’s carbon emission reduction targets.

Moving forward there is a degree of optimism that the Government understands the scale of the problem and is starting to address the issues holding back our public transport system.