Blackfish and the fight to end marine mammal captivity 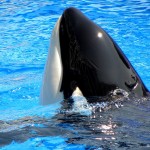 Blackfish is the name that Native American used to call orcas when they saw them in the ocean.

And Blackfish is the title of a 2013 documentary about orcas in captivity, with a focus on the tragic accident that saw star orca Tilikum brutally attack and kill his trainer Dawn Brancheau.

Blackfish is the story of one of the most beautiful, intelligent creatures that live on this planet, and the terrible hurt we’re causing by putting it in fish tanks for our entertainment.

Tilikum’s story and how his captivity ultimately led to Dawn’s death is the main plot point of the movie, but its real goal is to raise awareness of why it’s unethical to keep marine mammals in captivity.

Killer whales (Orcinus orca) are the largest of the oceanic dolphins, and one of the most popular species on the planet – their black and white markings make them immediately recognisable by children, especially after the release of 1993 family movie Free Willy. Besides Free Willy, though, the species always had a bad rep – starting from their scientific name, which roughly translates to “Hell-god”.

The funny thing is that wild killer whales never actually killed anybody. They are top predators – nothing eats them. They are fierce hunters, but they’re also incredibly social – they often stay in large, matriarchal families called pods, and different groups have different languages and cultures. This is one of the main reasons why captivity is so bad for them. Separated from their families and thrown in a pool with strangers from different pods, killer whales get traumatised, develop psychoses and end up hurting themselves, other whales, and yes, their trainers.

This year, Blackfish brought these issues on the spotlight, and a new wave of activism hit the major marine theme parks.

It would seem that marine mammal captivity will soon come to an end, but the way to get there is still quite rocky.

These establishments largely are profit-based companies, and convincing them to abandon their main source of income will not be easy. A possible solution comes from Dr. Naomi Rose, a marine mammal expert working for the Animal Welfare Institute.

Dr. Rose suggests that the best way to tackle the issue is to transform marine theme parks to whale sanctuaries, where animals can be taken care of by professionals. Former parks could eventually be used by foundations for education activities, as the whole concept of using captive whales for entertainment purposes progressively dies out.

Meanwhile, what can you do?

Stop going to marine theme parks. If you wanna watch some whales, do it in the wild, with a reputable organisation. I’ve seen humpbacks jumping out of the water just a couple of meters away and swam with pilot whales – trust me, seeing them in the wild is a glorious, spiritual experience. Seeing them in a fish tank is terribly depressing.

Do some activism – join a marine mammal group in your area, keep up to date with petitions and so on.

Well, the movie is a good start, and its website. The IUCN page is also good, and there’s tons of open-access papers on orcas on Google Scholar; this and this, on their social behaviour, might give you a good idea of how intelligent killer whales are. Oh, and you can read Dr. Rose’s piece here.