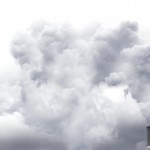 Beijing has revealed one more batch of measures intended to reduce its infamous air pollution problem, which has been dubbed an “airpocalypse.” English-speaking residents have taken to referring to the Chinese capital as Beige-jing or Greyjing.

A five-year plan has been announced. The number of new vehicles allowed on the roads will be limited and the facilities of 1,200 companies will be closed or upgraded. The regions featuring the worst air pollution will not grant planning permission to new industrial facilities. Companies that break environmental laws will not receive bank loans, tax breaks or public money. Reforms to the energy and water markets will increase costs for businesses, prompting them to improve their efficiency. Power plants, boilers, restaurants and outdoor barbecues have been targeted, with the latter actually banned. A public bicycle rental system will be instituted by 2017 to help achieve the aim of having public transportation account for 60 percent of vehicular trips. These moves had been widely anticipated.

Previously, factories have been shut and a massive subway-building programme undertaken, but precious little effect has resulted. The latest endeavour is one element in a broader plan to reduce the harmful particles in Beijing’s air by a minimum of 25 percent by 2017. These are PM2.5 particles – those which measure 2.5 microns or less and are dangerous as they’re so small they can penetrate the lungs and enter the bloodstream. Ma Jun of China’s Institute of Public and Environmental Affairs told the Economist that PM2.5 is now “a household word” in China. A statement at the website of the Beijing Municipal Environmental Protection Bureau described the latest effort as “a declaration of war against PM2.5.” The statement stressed that “The city will work relentlessly to improve air quality.”

The government of China is becoming ever more alarmed at the prospect of social unrest due to threats to public health that have included smog and the sandstorms that are caused by urbanisation, over-grazing and deforestation, which are both annual occurrences. This has been a side effect of breakneck industrial growth and mass migration to cities.

Beijing and the cities of Guangzhou, Guiyangs and Shanghai already limit new car sales, while another eight cities intend to follow. In Beijing, private cars are banned from the city on one day a week according to the final digit of the licence plate and licence plates are obtained through a lottery. Vehicles from other provinces are banned from entering the Fifth Ring Road during the rush hour, with a new twist being that vehicles from outside the city will require permission from the city government if they are to enter the Sixth Ring Road. Nevertheless, the average speed of vehicles is only 9.3 miles per hour, approximately the same as leisurely cycling.

The number of vehicles in Beijing will now be restricted to six million by the close of 2017. There is a target of a reduction of fuel consumption by at least five percent by 2012 through the promotion of alternative energy and smaller vehicles and encouraging people to drive less. The number of vehicles permitted in particular areas at certain times of the day will be limited from 2014.

Some officials have called for higher parking fees and fuel levies. A congestion charge for vehicles as seen in London and Singapore is also being mulled over. There have been suggestions that subsidies be offered for purchases of clean vehicles. These could find wider support. The government-owned China Daily newspaper quoted Fang Li, a spokesman for the the Beijing Environmental Protection Bureau, as saying, “Whoever pollutes the air is responsible to clean it up.” Li Kunsheng, the official in charge of vehicle emission management for the Beijing Municipal Environmental Protection Bureau, said, “In order to curb vehicle emissions, we have to introduce a market mechanism to reduce intensity of vehicle use.” He warned that measures “should be carried out carefully as they may affect people’s livelihoods.” Per a report by the Chinese Academy of Sciences, 22.5 percent of PM2.5 particles in the city arise from vehicle emissions.

Beijing’s air and water is amongst the worst in the world. The pollution cloud is visible from space. In January, Anthony Hedley, honorary professor at the University of Hong Kong’s School of Public Health, bewailed that levels of air pollution in Beijing neared those of the catastrophic London smog of 1952 which killed 4,500 people in five days. Undertakers ran out of coffins. 12,000 people died in the longer term. The United Kingdom then resembled China today with regards to its income per capita and industrial structure.