Did you know that a banana crisis is brewing? 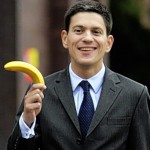 Bananas are central to life. Britons eat five million of them a year. Think of King Louis forging a deal with Mowgli as he peeled one in the Jungle Book. Bananas changed British politics when David Miliband was photographed holding one at the 2008 Labour Party conference while pulling a face, an episode that became known as the Banana Incident and is widely believed to have cost him the party leadership. Bananas play a major part in language, with top banana being very good and a banana republic rather bad. And think of all those songs about bananas: Spike Jones’ Yes! We have no Bananas, Harry Belafonte’s Day-O – the Banana Boat Song – and the Boomtown Rats’ Banana Republic.

But unbeknownst to most of us a banana crisis is afoot.

Insects and fungal infections could prove disastrous if they continue unabated. The government of Costa Rica, the world’s largest supplier of bananas, has gone so far as to term its banana crisis a “national emergency.” That characterful fruit brings half-a-billion dollars a year into the country, but the industry has been devastated by plagues of mealybugs and scale insects. These weaken plants and cause blemishes to them, and as much as 20 percent of production has been written off when batches have been rejected.

Magda Gonzalez, director of the State Phytosanitary Services division of the Costa Rican agricultural industry, recently told a journalist, “I can tell you with near certainty that climate change is behind these pests.” Insect populations have increased in recent years as a result.

Scientific American reported that a form of banana-eating fungus threatens a worldwide banana crisis. Fusarium oxysporum f. sp.cubense tropical race 4 (Foc-TR4) – banana wilt or Panama disease – was once believed to be limited to parts of Asia and northern Australia, but has now been found in China, Indonesia, Jordan, Mozambique, Malaysia, Pakistan, the Philippines and Taiwan. In Jordan, 80 percent of plantations have been affected, which is most certainly a crisis.

Vehicles and footwear can allow the disease to cross long distances and the vast majority of bananas are at risk. Once the disease occurs in a location, it’s impossible to grow bananas that are sensitive to it for decades – a true banana crisis. Gert Kema, a researcher into this fungus for Wageningen University and Research Centre in the Netherlands told Scientific American: “I’m incredibly concerned. I will not be surprised if it pops up in Latin America in the near future.”

This is not the first banana crisis. It was a strain of Foc-TR4 that wiped out the Gros Michel cultivar banana, the principal exported variety until the 1950s. Gros Michel was replaced by Cavendish, which is resistant to that strain, but vulnerable to Foc-TR4. There has been only limited success in producing Cavendish bananas that are fully resistant to Foc-TR4 through breeding and genetic engineering. The Cavendish is likely the only variety of banana people who only encounter them in supermarkets have ever seen. There is no other variety that tastes good, ripens quickly, can be transported long distances without sustaining damage and it is easy to grow in large quantities.

Researchers have expostulated that a Foc-TR4-induced banana crisis could endanger banana exports all over South America and the Caribbean, which is over 80 percent of the world’s supply. If the disease spread in Africa, it would threaten the food security of millions of people as bananas are an important element of people’s diets.