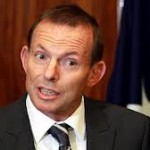 Australian Prime Minister has denied that climate change has anything to do with the recent bout of droughts that have hit New South Wales and Queensland.

While visiting some of the beef farms worst affected by the drought, Mr Abbott said:

‘If you look at the records of Australian agriculture going back 150 years, there have been good times and bad, tough and lush times … This is not a new thing in Australia.’

The havoc that climate change is already wreaking on the world has been evident to some countries for years, but has been particularly evident to the West these past months. In addition to Australia’s droughts, while the USA has been experiencing freak storms and arctic temperatures, the United Kingdom has been suffering widespread flooding after the wettest start to the year in 250 years.

Opposed to the US and UK where the ersatz weather is causing the respective government to ramp up the debate on climate change (John Kerry, US Secretary of State recently called climate change a Weapon of Mass Destruction) Australian Prime Minister Tony Abbott remains stubbornly sceptical.

Though Mr Abbott’s comments have caused outrage in some corners of the Australian press, the opposition isn’t as pronounced as one might have expected. A recent annual report on Australians’ attitude to climate change has revealed that although 81% of Australians recognise that global warming is a problem, it is not a top concern. In a list of 16 topics ranging from terrorism to living standards to drugs that Australians were asked to rank in levels of importance, climate change came in at No. 8. Indeed, even on a list of climate issues it ranked below household waste as a top concern.

Global Warming back on the agenda

This apparent apathy of Australians is surprising in a time when across the globe climate change is finding its way back onto the agenda. A recent report in the UK caused concern when it warned that, although wet and soggy now, the country could expect a 257% rise in heat-related deaths by 2050.

Meanwhile in a speech in New York, the city’s mayor Michael Bloomberg said that cities were on the ‘frontlines of the battle against climate change’ and,

‘more and more cities are leading the charge … As the world becomes increasingly more urban, the importance of bold local action – particularly on climate change – will continue to grow.’

Despite Mr Abbott’s doubts, a few Australian cities are already showing examples of such bold action. Sydney Lord City Mayor Clover Moore is a vocal advocate for radical action on climate change supporting the introduction of carbon pricing in Australia and pushing the campaign for ‘Sustainable Sydney 2030.’

Set in a stunning landscape with easy Sydney Airport transfers available, the city is Australia’s most popular business and tourist destination. It is also on the road to become the country’s most sustainable city. A few years ago the Green Meetings Industry Council put forward an agenda for 2020, striving towards more sustainable and economically friendly business practices. The agenda included the aim to not only have zero net environmental effect but also to positively enhance the environments they are operating in.

This is only the start. In an article for CNN, Mayor Moore said,

‘With a warming of two degrees  — and projections show we are headed for a four to six degree change — we risk catastrophic climate change … While Sydney is moving towards a more sustainable future, climate change demands we do more.’

About the Author Danny Mortimer

Danny has recently completed his MA in Economics and Political Geography. After a year out working in a conservation park in East Africa, Danny hopes to return to London to embark upon a Ph.D.