Algae In Lake Erie Makes The Water Look Like Putty 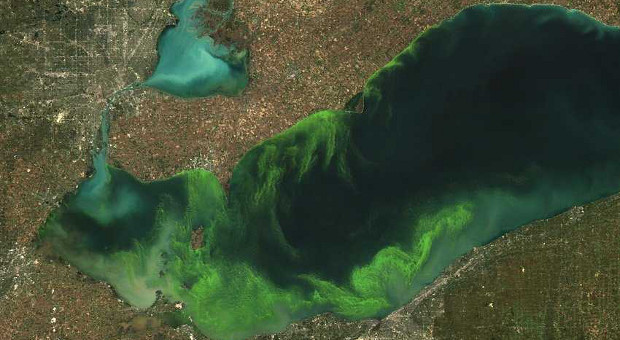 In Canada, algae in Lake Erie’s western part has caused the waters to resemble a thick, pea soup. In recent weeks, microcystin, a toxin emanating from this muck, entered the water supply of Toledo, Ohio, obliging officials to ban almost half a million people from using tap water for three days. Microcystin can sicken people and kill pets. Children and those with weak immune systems were advised to not shower or bathe. The algae is largely attributed to crop runoff.

The problem was worse in the 1960s, when some experts described Lake Eire as virtually sterile. Sewage treatment was improved and phosphorous in detergents limited. Now, farmers are blamed.

Ron Schimming’s 400-acre soybean and corn farm is six miles away from the lake. He protested, “They shouldn’t be placing all the blame onto us.” He doesn’t dispute that farm runoff is responsible for all that algae in Lake Erie, but insists that he uses as little fertiliser as he can get away with: only so much can be absorbed, hence any more would be wasted. As he explained, “If you put an extra two pounds on you’ve wasted your money because it just does not use it.”

The Ohio Farm Bureau, representing 60,000 farmers, has long promoted correct fertiliser usage. There have also been local conservation programs such as the Ottowa Soil and Water Conservation District. Farmers in the area have indeed been employing less fertiliser over the last 10 years.

The manner in which fertiliser is applied has, however, changed, with it placed directly onto land where previously it was worked into the soil, making it easier for phosphorous to flow directly into the creeks that feed the lake rather than interacting with the soil. Fertiliser is most effective when introduced underground, but spreading it on the surface is faster. Farmers could also not use fertiliser in winter, when it will remain atop frozen ground instead of sinking in. Ohio’s lawmakers have passed a measure necessitating that most farmers be trained prior to applying fertiliser.

Climate change could also be responsible for the algae in Lake Erie because there are more severe rainstorms which accelerate farm runoff and sewer overflows. It also raises the temperature of the water close to the lake’s surface, which promotes algae growth.

Water quality experts continue to try to understand why phosphorous from fertiliser is seeping into the lake at rates unseen in decades. It’s feared that the algae in Lake Erie is feeding on other sources including sewage and runoff from livestock. More pavements in urban areas cause water to drain more rapidly into waterways without being filtered by vegetation. Zebra and quagge mussels were introduced in the 1980s and consume beneficial forms of algae while turning up their noses at the harmful blue-green stuff. There’s more corn farming to meet the demand for ethanol for fuel – Glenn Benoy, a water expert for the US-Canadian International Join commission that manages lakes and rivers on the countries’ shared border, affirmed, “Corn is demanding when it comes to fertilizers.” There aren’t enough railcars to supply the fertiliser required.

Sandy Bihn of the non-profit group, Lake Erie Waterkeepers, whimpered that the algae in Lake Erie made the water look like putty – “Literally, green putty.” She added, “The water wasn’t even like water any more. It is disgusting. It is putrid. It’s awful.” She acknowledged that farmers weren’t entirely to blame.